Puerto Rico‘s embattled Governor Ricardo Rossello has announced he will resign after nearly two weeks of mass protests triggered by a leak of crude and insulting chat messages between him and his top advisers.

A crowd of thousands outside the governor’s mansion in San Juan erupted into cheers and singing after Rossello’s announcement late on Wednesday.

“I announce that I will be resigning from the governor’s post effective Friday, August 2 at 5 pm,” Rossello said in a video posted on Facebook. The protesters’ demands “have been overwhelming”, he said, adding: “And I’ve received them with highest degree of humility.”

The protests have been ongoing since July 13, when the Center for Investigative Journalism released 889 pages of text chats on the encrypted messaging app Telegram in which Rossello and 11 other male administration members mocked gay people, women and hurricane victims.

The 40-year-old, a Democrat elected in 2016, is the first governor to resign in the modern history of Puerto Rico, a territory of the United States with more than three million American citizens who do not have full representation in the country’s Congress or the right to vote for president.

“One protester told me, this was their ‘Arab Spring’. It was started to remove the governor but in the last 10 days it has grown into much bigger issues such as education and health …They want complete change,” he said.

Sara Echevarria said she flew in from Washington, DC on Sunday specifically to take part in the protests.

“I feel a sense of relief and empowerment because we finally made history in finally getting him to resign after so many days,” she told Al Jazeera.

“This was a resistance movement I would say, finally all the power energy and frustration came out, we had everybody with us, and it’s here to stay, we are demanding big changes from our government, not just his resignation.

“What happens [next] is yet to be seen, but it is not just to put another interim government, which is going to be Wanda Vazquez … we don’t want her either, it has to be someone clean, fresh, new and genuine and honest .. but I don’t know what the future hold for us,” she added.

Under Puerto Rico’s constitution, the secretary of state would normally assume the governorship, but since Secretary of State Luis Rivera Marin became one of more than a dozen officials to resign in the uproar over the leak, leadership of the island would fall to Vazquez.

Elizondo said there were many challenges ahead for Puerto Rico despite the celebrations.

“This is an island is governed by the old guard, but [now] the youngsters are saying we had enough we are now going to take our future of our islands in our hand,” he said, adding that Puerto Ricans were also frustrated at being treated as “second-class citizens by Washington, DC”.

“By no means this political crisis is over … this is a celebration, but the fact remains there is still a lot of challenges on this island, how to rebuild two years after Hurricane Maria, how to get the funds they need, who will govern this island, and where will this movement go from here.”

The upheaval comes as the island tries to restructure part of $70bn in debt and cope with a 13-year recession that has led to an exodus of nearly half a million people to the US mainland in the past decade.

Many Puerto Ricans are resentful over the resulting pension cuts, school closings and other austerity measures.

The economic crisis is in part a result of previous administrations – including that of Rossello’s father, Pedro – that overspent, overestimated revenue and borrowed millions as the island sank deeper into debt.

In 2017, Puerto Rico filed for the equivalent of bankruptcy. Congress approved a financial package, and a federal board is overseeing the island’s finances.

Rossello spent much of his time as governor fighting austerity measures and seeking federal funds after Hurricane Maria devastated the island in September 2017, causing thousands of deaths and more than $100bn in damage.

Nearly two years later, some 30,000 homes still have tarp roofs, power outages remain common, and Puerto Rico has received less than a third of the roughly $40bn pledged by the US government.

Rossello complained earlier this year of unfair treatment and a hostile attitude from some US officials.

The public’s confidence has also been rocked by a recent string of corruption arrests involving such figures as the island’s former education secretary and the one-time chief of health services. 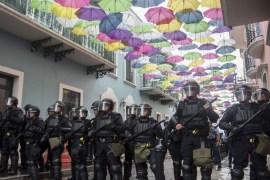 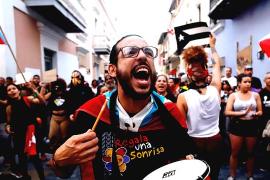 Many Puerto Rican Americans who live in the US are back on the island to demand the resignation of their governor.