Hundreds of people have gathered in the town of Waechtersbach to condemn racist violence after an Eritrean man was shot by a German national “due to the colour of his skin”, according to police.

The 26-year-old Eritrean was brought to hospital in serious condition on Monday but was now stable, local media reported on Tuesday.

Alexander Badle, a spokesman for Frankfurt’s state prosecutors, said on Tuesday that authorities “are currently working on the assumption of a very clear xenophobic motive”.

The perpetrator, who later shot himself in the head, appeared to have chosen his victim at random, the spokesman added.

Police on Monday found the “apparently lifeless” body of the suspected shooter in a car in a neighbouring town. He was later declared dead in hospital.

But investigators were not able to link the 55-year-old shooter to any particular far-right nationalist group.

“We have no valid evidence that there were contacts to the right-wing nationalist or far-right scene,” said a police spokesman, emphasising that the investigations were still ongoing.

Meanwhile, about 400 people attended a vigil at the crime scene on Tuesday evening as others held a protest against far-right violence in Germany.

In a joint statement, the town’s leaders including Mayor Andreas Weiher said people were invited to “think of the victim and his family, and send a signal against racist violence”.

Anti-migrant sentiment has been on the rise in Germany over the past few years.

The Alternative for Germany (AfD) party became the first far-right nationalist movement to enter the German parliament since World War II, after winning 12.6 percent of the vote in Germany’s federal election in 2017. 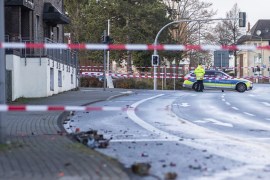 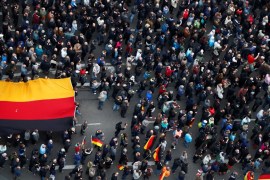 How much of a threat is the far right in Germany?

Street protests have raged in Chemnitz as two migrants are arrested for the killing of a German man. 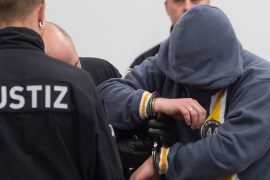 Dresden’s high court sentences seven members of the Freital Group to between five and 10 years for attempted murder. 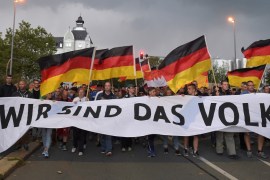 How East Germany became a stronghold of the far right

The lack of serious action against the far right has enabled the current xenophobic surge in East Germany.