Nine months after his death, the Twitter feed of murdered Saudi journalist Jamal Khashoggi has become a time capsule.

Khashoggi’s last tweet to his audience of 1.7 million is dated October 2, 2018, the day he was killed in the Saudi consulate in Istanbul.

In the time after his death, the Saudi-born Washington Post columnist would remain an important topic on the social media platform.

In the Gulf region, Khashoggi’s murder became a flashpoint for camps that formed overnight when just over a year earlier a political rift erupted between Qatar and four other countries, namely Saudi Arabia, the United Arab Emirates, Egypt and Bahrain.

During that crisis, Twitter bots had been used to amplify talking points on both sides.

Those tactics were used again in October last year, when Khashoggi was killed, according to analysis by Al Jazeera.

If I'm an authoritarian leader, that means I can change the discourse simply by putting pressure on a few tens or hundreds of influencers

by Alexei Abrahams, Citizen Lab fellow at the University of Toronto

In an effort to understand how bots attempted to influence the conversation around the Khashoggi murder, Al Jazeera collected almost 1.8 million tweets, finding almost 1,000 bot accounts.

Although Al Jazeera was not able to determine who controlled these bots, some conclusions about their political stance could be drawn by looking at which accounts they retweeted.

For example, one of the most retweeted accounts following the Khashoggi murder is @mbs_ksa90 – a username that is most probably a reference to Saudi Crown Prince Mohammed bin Salman (MBS) and the Kingdom of Saudi Arabia, an account with over 156,000 followers that mainly shares messages supporting the leadership of Saudi Arabia.

Al Jazeera’s findings were in line with research by the University of Toronto’s Citizen Lab fellow Alexei Abrahams, who investigates information manipulation on social media in the Gulf region.

Tweets collected by Abrahams between September 30 and November 26, 2018, showed that only a small amount of influencer accounts played a crucial role in the Twitter conversation about the Khashoggi murder.

“We intercepted more than 2.4 million tweets and we found a couple of accounts attract so much retweeting that when do the math you’ll see they generate most of the conversation,” told Al Jazeera.

According to Abrahams, out of around 368,000 accounts in the data set he collected, just 281 main influencers were responsible for about 80 percent of all tweets.

The reason for this is that those accounts saw massive amounts of retweets, amplifying the original tweeter’s voice by several factors.

“If retweets were income, Gulf Twitter would be somewhere on the order of apartheid South Africa in terms of inequality of distribution,” he said.

“And if I’m an authoritarian leader, that means I can change the discourse simply by putting pressure on a few tens or hundreds of influencers.”

Abrahams’ research categorised the 2.4 million tweets into two camps specifically, a “pro-Saudi” camp and one critical of the kingdom’s leadership, which included influencers from countries like Turkey, Europe and Qatar.

The most prevalent account belonged to Saudi businessman Monther Al Sheikh Mubarak, which accounted for seven percent of all 2.4 million tweets, garnering more than 200,000 retweets during the time period.

Another prominent Twitter user that pushed a narrative was Qatar-based Abdullah al-Athbah, editor of al-Arab newspaper, who drove over 35 percent of tweets and retweets within the side considered critical of the Saudi government.

That reach was boosted by using bots.

An important indicator the bots Al Jazeera identified were probably created to spread propaganda is the fact that they were created just before the GCC Crisis, which started in June 2017.

Their creation date, combined with the fact that the accounts mostly retweeted other accounts and almost never interact with other users, is a giveaway they are bots.

And in the case of the bots Al Jazeera identified, the month that saw the highest number of accounts created was October 2018: the month Jamal Khashoggi was murdered. 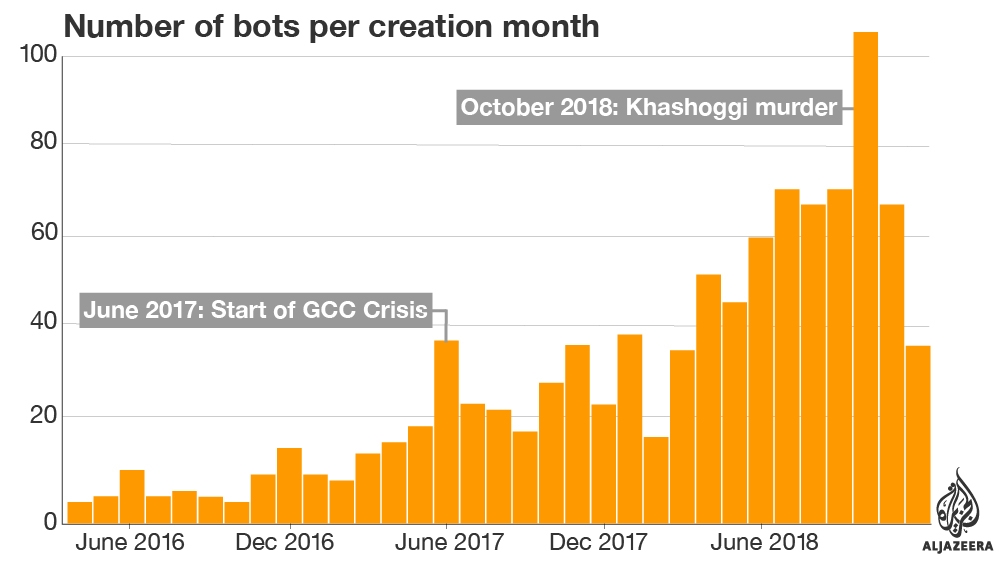 The result of this inequality of voices on Gulf Twitter, with only some standing out from the crowd, is true for both the people that are supportive of the government and those that are critical of them.

And this, Abrahams said, comes with a risk.

“Political movements must cohere around a handful of leaders – influencers, agitators, activists, revolutionaries, etc – who are able to articulate a clear set of grievances and demands, to specify when and where acts of protest will occur, and what tactics will be used,” Abrahams said.

“Social media platforms like Twitter encourage this perception by marketing themselves as an open and inclusive forum where everyone has a chance to speak,” he added.

Because the political discourse is monopolised by such a small number of influencers, Abrahams explained, these influencers then become targets of co-option, intimidation, or assassination.

“Ironically, then, the Twitter conversation about Jamal Khashoggi’s murder reflects precisely the sort of inequality of influence that made Jamal a target in the first place.”

“The reality is that while many speak, few are heard.”

Another important aspect of the way bots attempted to influence the Khashoggi conversation was by muddying the narrative about what happened to Khashoggi in the days following his disappearance.

How conspiracy theories enter the narrative

According to the Digital Forensics Research Lab (DFR Lab), which studies and researches the spread of disinformation online, conspiracy theories played a key role in the two weeks after the Khashoggi murder.

“While the media and intelligence agencies tried to understand what happened to Khashoggi, social media influencers aligned with the Saudi government carried out an information campaign targeting domestic and foreign audience by amplifying a conspiracy theory video,” DFR Lab said.

“Among suspicious accounts, there were a number of new accounts created between August and October 2018,” DFR Lab found, similar to what Al Jazeera’s analysis found.

“There is a book about Russian propaganda called Nothing is true, everything is possible, and its thesis is that [this type of propaganda] doesn’t mean to convince you or drown your voice,” he said.

“This reminds us of what Trump said after the Khashoggi murder: ‘We may never know what happened’,” he added. “The main goal is to create doubt.”