Representatives from the nations that are still parties to the Iran nuclear deal will meet on Sunday in Austria’s capital, to discuss to what extent the agreement can be salvaged, according to the European Union’s foreign policy service.

China, Russia, the United Kingdom, France, Germany and the EU representatives will “examine issues linked to the implementation of the [2015 nuclear accord] in all its aspects”, the EU statement said on Tuesday.

The urgent meeting in Vienna, which will be chaired by the EU foreign policy service’s Secretary-General Helga Schmid, was requested by France, Germany, the UK and Iran, it said.

The accord, which is formally known as the Joint Commission of the Joint Comprehensive Plan of Action (JCPOA), has been on life support since the United States withdrew from it last year and reimposed biting sanctions against Iran.

Amid rising hostilities with the US, Iran’s Revolutionary Guards on Friday seized a tanker sailing under the flag of US ally Britain.

The seizure of the Swedish-owned vessel has been seen as a tit-for-tat move after British authorities detained an Iranian tanker on July 4 in the Mediterranean on suspicion it was shipping oil to Syria in breach of EU sanctions.

“Throughout history, Iran has been and will be the main guardian of security and free navigation” in the Gulf, President Hassan Rouhani said late on Monday.

“There is still no adequate and lasting stability and security in the region,” he added, emphasising Tehran was not seeking to stoke tensions.

The head of Iran’s navy said in an interview published on Tuesday that Iran closely observes “all enemy ships” going through the Gulf using drones.

“We observe all enemy ships, especially America’s, point-by-point from their origin until the moment they enter the region,” Rear Admiral Hossein Khanzadi said, quoted by YJC news agency.

“We have complete images and a large archive of the daily and moment-by-moment movements of coalition forces and America.”

Since the US began reimposing sanctions on Iran, tensions have mounted with drones shot down and tankers mysteriously attacked in the sensitive waters of the oil-rich Gulf.

US President Donald Trump called off air raids against Iran at the last minute in June after Iranian forces downed a US drone.

Iran also said on Monday it had arrested 17 suspects and sentenced some to death after dismantling a CIA spy network – claims Trump dismissed as “totally false”.

The 2015 deal curbed Iran’s nuclear programme in exchange for sanctions relief. But on May 8 – more than a year after the US withdrawal – Iran said it would disregard certain limits on the programme as it was not receiving any benefits.

Iran has threatened further measures if the remaining parties to the deal fail to help it circumvent US sanctions, especially to sell its oil.

It has since exceeded the deal’s limits on its enriched uranium and heavy water stockpiles, as well as passing a cap on its uranium enrichment.

The 4.5 percent enrichment level it reached is well below the more than 90 percent required for a nuclear warhead.

Iran has yet to specify what other steps it may take, and has repeatedly emphasised its actions can be reversed “within hours” if European partners deliver on commitments.

Meanwhile, China described as “illegal” US sanctions imposed on its companies as part of Washington’s campaign against Iran. 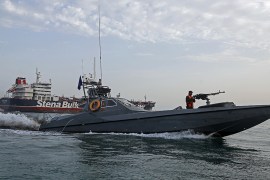 FM Jeremy Hunt says UK in talks with a number of countries to ensure safe shipping after Iran seized its oil tanker. 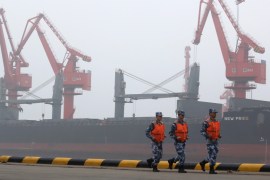 With tension rising between Tehran and the West, Washington’s new punitive measures could worsen trade instability.