The party of Ukrainian President Volodymyr Zelenskyy appears likely to win an absolute majority in Sunday’s parliamentary elections with a record share of the vote, according to partial results and media projections.

With more than 52 percent of ballots counted on Monday, Zelenskyy’s Servant of the People party – named after the sitcom he starred in before his shock presidential win in April – took 42.45 percent of the vote.

Media projections showed Servant of the People on track to secure 122 seats assigned by party lists, which represent half of the 450-member parliament, and 126 seats from members who are directly elected in their districts – exceeding the total of 226 seats needed to secure a majority in the legislature.

It was the highest score in a parliamentary election for any party since Ukraine gained its independence with the 1991 collapse of the Soviet Union.

The result is the culmination of a stunning turnaround in Ukrainian politics and will bring a host of newcomers into parliament and government. They will face a long list of challenges in a country heavily dependent on foreign aid and scarred by years of war with Russia-backed separatists.

Four other parties passed the five percent threshold to enter the assembly, the results showed.

The pro-Moscow Opposition Platform-For Life came second in the election with 12.89 percent of the vote, the preliminary results showed. 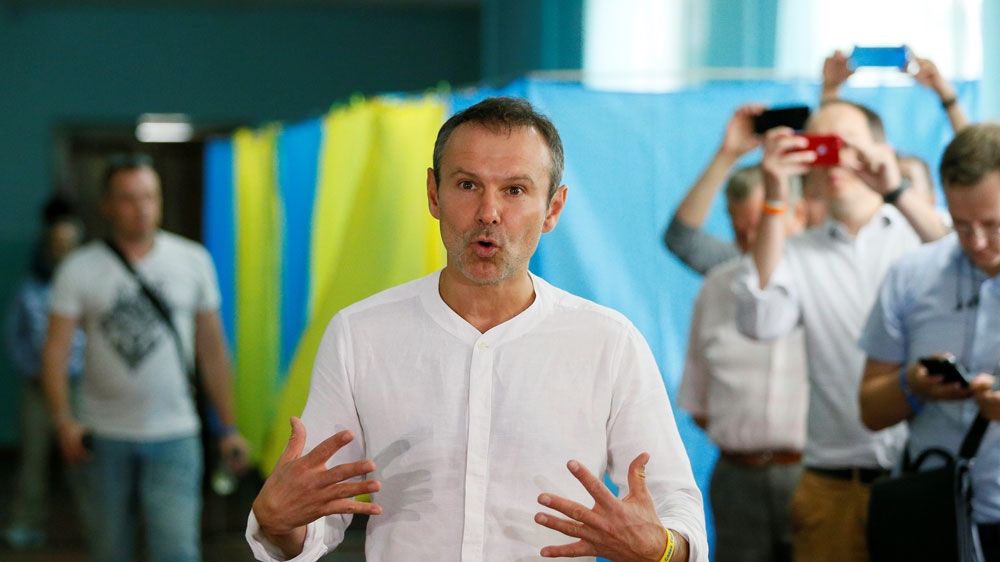 Another new party, Voice, fronted by rock star Sviatoslav Vakarchuk, also passed the 5 percent threshold to enter parliament. Voice is the only party to which Zelenskyy has offered coalition talks.

Speaking shortly after exit polls indicated a win for his Servant of the People, Zelenskyy reiterated promises to stamp out corruption and end a separatist war in eastern Ukraine that has killed 13,000 people in the past five years.

“Our main priorities – and I repeat this for every Ukrainian – are to end the war, return our prisoners and defeat the corruption that persists in Ukraine,” the 41-year-old comedian-turned-president said at his party’s election headquarters.

He also said he was looking for a “new face and a specialist in the economy” to become the next prime minister.

“There should be changes in our country. I am 49 years old and judging from my experience, I know we had no other way but to make such a choice. Otherwise, we would not be able to get rid of the past,” said Olena Moskalenko, a finance specialist from Kiev.

“I think we are probably lucky. I have one hope only – that we won’t get disappointed in our choice again and in our expectations,” she told Reuters news agency.

Zelenskyy’s victory in April was seen as a rejection of the country’s traditional elite for failing to end the separatist conflict, revive the economy or tackle widespread corruption. Faced with a hostile parliament after his win, Zelenskyy quickly called snap elections and vowed to bring in a new generation of politicians to lead the country.

Both Zelenskyy and Vakarchuk packed their parties with young people new to politics and banned candidates who had previously served as legislators.

Many voters seemed excited by the prospect of new political forces coming to power.

Kateryna, a 31-year-old Kiev woman on maternity leave, said she cast her vote for Vakarchuk because she “believes in his young intelligent team”. She added: “It is the first time I am voting for someone because I like them, not because I have to choose the lesser evil.”

Only 424 of the 450 seats in Ukraine’s parliament, the Verkhovna Rada, will be filled this election, as the rest represent Crimea, annexed by Russia in 2014, or territories controlled by separatists.