The UK plans to deploy a European-led naval force to ensure safe shipping through the Strait of Hormuz after Iran seized a British-flagged oil tanker in what London called an act of “state piracy”.

“Under international law, Iran had no right to obstruct the ship’s passage – let alone board her. It was, therefore, an act of state piracy,” Hunt told Parliament.

“We will now seek to put together a European-led maritime protection mission to support safe passage of both crew and cargo in this vital region,” he added.

The UK has called on Iran to release the vessel and its 23 crew members immediately, with British Prime Minister Theresa May‘s spokesman describing the seizure – in apparent retaliation for the British capture of an Iranian tanker two weeks earlier in Gibraltar – as illegal.

“We do not seek confrontation with Iran but it is unacceptable and highly escalatory to seize a ship going about legitimate business through internationally recognised shipping lanes,” the spokesman told reporters on Monday.

In response, Iranian Foreign Minister Mohammad Javad Zarif said Iran’s actions were not in retaliation for the British capture of the Iranian tanker and he warned the West against “starting a conflict,” saying Tehran was not seeking confrontation.

“Starting a conflict is easy, ending it would be impossible,” Zarif told reporters after meeting his Nicaraguan counterpart on an official visit on Monday.

Jeremy Hunt said Britain has had constructive discussions with a number of countries in the last 48 hours over starting an international maritime mission.

He also said he would discuss how this would complement US proposals in the area but Britain would not join the American plan as it wanted to preserve the 2015 nuclear deal, aimed at curbing Tehran’s missile programme in return for the lifting of sanctions.

President Donald Trump unilaterally pulled the United States out of the landmark multilateral accord signed by his predecessor Barack Obama.

European countries including Britain have been caught in the middle.

“It will not be part of the US maximum pressure policy on Iran because we remain committed to preserving the Iran nuclear agreement,” Hunt said of the planned US maritime mission.

The foreign minister also said a second warship that Britain sent to the region would arrive by July 29.

The Iranian capture of the ship in the global oil trade’s most important waterway was the latest escalation in three months of spiralling confrontation with the West that began when new, tighter US sanctions took effect at the start of May.

Britain was thrust more directly into the confrontation on July 4, when its Royal Marines seized an Iranian tanker off the coast of Gibraltar.

On Friday, IRGC commandos rappelled from helicopters and seized the Stena Impero in the Gulf’s strategic Strait of Hormuz. The tactics it used matched that of the UK, used two weeks before.

Iran impounded the tanker, claiming it failed to respond to distress calls and turned off its transponder after hitting a fishing boat.

Footage obtained by Reuters News Agency from an Iranian news agency showed the British tanker docked in an Iranian port – with Iran‘s flag hoisted atop.

Paul Morcos, a political and strategic analyst, warned: “The level of risk is rising.”

“The region is heading either towards escalated tensions and conflict, which at its peak could be the outbreak of war or direct military friction, or it may go towards negotiations,” he said.

Stephen Zunes, a professor of politics at the University of San Francisco, told Al Jazeera the standoff increases the chances of a conflict even if neither side wants a war.

“With the increasing military threats from the US, this is perhaps the Iranian government’s way of saying to the European community: ‘Hey folks, this is serious. You need to help us out here or things could get really bad,'” Zunes said.

The UK will now ask all Britain-flagged ships to give the government notice of intentions to pass through the Strait of Hormuz, Hunt said.

“We will then advise them as to the safest way to transit, which may involve travelling in convoy,” he said.

In a joint note issued by leading trade associations on Monday, ship captains were requested to register with the Royal Navy’s liaison body, the United Kingdom Marine Trade Operations, and to provide their transit plans 24 to 48 hours before entering the region.

Details requested included the nationalities of crew members and any ship-speed constraints.

The information provided would be passed onto the US Navy and other naval forces involved in efforts to create a US-led multinational security initiative known as Operation Sentinel.

Washington says the plan is to increase surveillance of and security in key waterways in the Middle East. 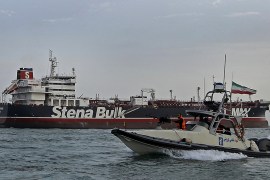 British prime minister chairs emergency meeting to decide on how to respond after Iran seized its oil tanker. 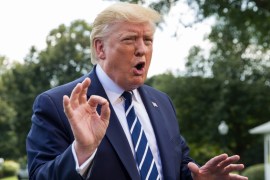 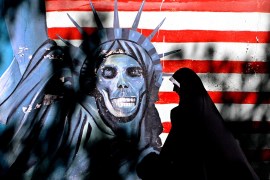 Iran says it arrested 17 CIA spies, sentenced some to death

Iranian official says 17 were recruited by the CIA to spy on Iran’s nuclear and military sites, a claim the US denies.