Flooding caused by the downpour trapped 285 hikers from three tourist groups, according to the Jiangxi provincial emergency management bureau.

The remaining hikers were rescued by Monday morning after local authorities sent more than 530 rescuers to the affected area, according to the Xinhua news agency.

In Sanyuan district of Sanming city, as much as 150mm fell between 6pm and 9pm local time.

The local meteorological department has issued a red alert for heavy rain even as the downpours caused widespread flooding in the city. At Xinshibei Road, the main street in Sanming city, about 300 metres of the road was underwater.

China has a four-tier colour-coded warning system for severe weather, with red representing the severest conditions, followed by orange, yellow and blue.

Elsewhere, torrential rain hit Danling County in southwest China’s Sichuan province on Sunday, battering the county with up to 240mm rainfall in some regions.

As a result, Danling observatory issued a red alert for the rainstorms early on Monday morning. In the event, nearly 20 landslides were reported.

As of 10am on Monday, the rain had affected more than 72,000 residents in seven villages and towns and 1,235 residents were evacuated to safety. Huge areas of farmland have been flooded causing losses of around $29m.

Further showers are likely over the next few days, but these seasonal rains are not forecast to be as intense. This should give the floodwater a chance to recede slightly, at least for the time being. 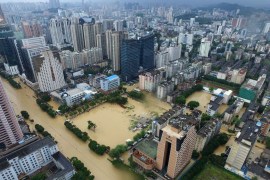 At least 27 people are still missing as the remains of Typhoon Megi continue to cause destruction. 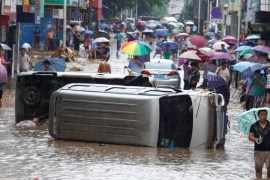 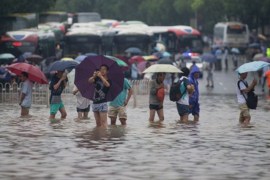