China‘s treatment of its Uighur Muslim minority is the “stain of the century”, US Secretary of State Mike Pompeo said on Thursday.

Speaking at the United States-hosted Ministerial to Advance Religious Freedom conference, Pompeo also accused Beijing of pressuring countries not to attend the gathering.

“China is home to one of the worst human rights crises of our time,” Pompeo told participants at the end of the three-day conference in Washington, DC. “Is that consistent with the guarantee of religious belief that is found directly in the Chinese constitution?”

The US official, who this week said more than 100 foreign delegations were invited to the conference, congratulated countries that defied alleged Chinese pressure to stay away.

The Chinese government on Thursday rejected any suggestion it abuses religious and human rights.

“In China, this situation of so-called ‘religious persecution’ does not exist,” Chinese Foreign Ministry spokesman Lu Kang told a news briefing in Beijing after the White House ceremony.

“We demand that the United States correctly view China’s religious policies and the status of religious freedom in China, and stop using the issue of religion to interfere in other countries’ affairs.”

Nearly two dozen nations at the UN Human Rights Council this month urged China to halt the persecution of ethnic Uighurs in its western region of Xinjiang, where UN experts and activists say at least one million are held in detention centres.

In response, Saudi Arabia, Russia and 35 other states wrote a letter commending what they described as China’s remarkable achievements in the region.

On Thursday, the country’s UN Ambassador Abdallah Al-Mouallimi told reporters in New York that the “letter talks about China’s developmental work, that’s all it talks about, it does not address anything else.”

“Nobody can be more concerned about the status of Muslims anywhere in the world than Saudi Arabia,” he said. “What we have said in that letter is that we support the developmental policies of China that have lifted people out of poverty.”

A copy of the letter, seen by Reuters, said security had returned to Xinjiang and the fundamental human rights of people of all ethnic groups there had been safeguarded.

“Faced with the grave challenge of terrorism and extremism, China has undertaken a series of counter-terrorism and deradicalisation measures in Xinjiang, including setting up vocational education and training centres,” the letter read.

The US has been weighing sanctions against Chinese officials over their policies in Xinjiang, including the Communist Party chief of the region, Chen Quanguo, but has held back amid Chinese threats of retaliation.

Relations between the US and China are already tense over a tit-for-tat trade war, with the US alleging that China engages in unfair trading practices. 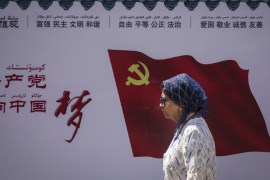 Turkey calls China’s treatment of its Muslim ethnic Uighur minority ‘a great cause of shame for humanity’. 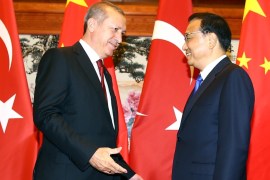 Erdogan in China amid tension over treatment of Uighurs 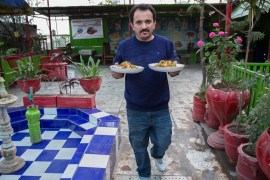 ‘China is after us’: Uighurs in Pakistan report intimidation

Members of Uighur Muslim community say Islamabad is not fighting for their rights as it keeps close ties with China. 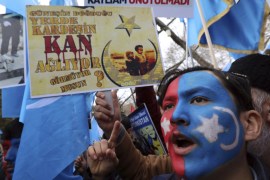 US ‘weighing’ China sanctions for treatment of Uighur Muslims