United Nations – Yemenis are dying from cholera, hunger and other ills because Saudi Arabia and the United Arab Emirates (UAE) are not making good on funding pledges they made earlier this year, a top United Nations official warned on Thursday.

Mark Lowcock, the UN’s emergency relief coordinator and under-secretary-general for humanitarian affairs, told the UN Security Council while most of the 40 countries that made pledges in February had stumped up aid cash, Abu Dhabi and Riyadh were holding out.

“Those who made the largest pledges – Yemen’s neighbours in the coalition – have so far paid only a modest proportion of what they promised,” said Lowcock, referring to the coalition of the UAE, Saudi and others fighting in Yemen.

Governments promised a combined $2.6bn in February, including $500m each from mega-donors Abu Dhabi and Riyadh. Without that cash from the Gulf powers, the “response plan is currently just 34 percent funded”, said Lowcock.

Cash shortfalls have left UN-backed aid teams unable to carry out vital work in Yemen, where fighting has forced millions from their homes and left 24.1 million – more than two-thirds of the population – in need of aid, said Lowcock.

Abdallah al-Mouallimi, Saudi’s UN ambassador, said his country had paid more than $400m to the United Nations and other aid organisations this year.

“This year we alone … we have paid more money into Yemen than any of the donors in the world,” Mouallimi told reporters.

Work on 30 new feeding centres in the most famine-stricken parts of Yemen has ground to a halt, and as many as 60 centres could shut their doors in the coming weeks, risking the lives of some 7,000 malnourished children, he added.

“In [the capital] Sanaa, a UN-supported treatment plant that purifies water for agriculture has also started to shut down,” said Lowcock.

“This means up to four million people could soon be eating vegetables irrigated with dirty water, making them more likely to contract cholera.”

Yemen could be slipping back into what many experts called the “world’s worst-ever cholera epidemic”, said Lowcock.

Nearly 500,000 cholera cases have been reported already this year, a big increase from the 380,000 cases reported during all of 2018 and an indication the infectious bug was spreading again.

The Saudi and Emirati missions to the UN in New York City did not immediately reply to Al Jazeera’s request for comment. Both countries say they work hard to ease the humanitarian crisis in a country in which they are involved militarily.

Britain’s ambassador to the world body, Karen Pierce, said “simply not enough” cash had been handed over so far and urged “donors to rapidly disburse their funds to the UN-led appeal”.

“There is a risk of this escalating and that we take two steps forward and three back,” said Pierce. “The risk of the cholera returning is horrific and we need to do everything we can to stop that.”

Tens of thousands of people have been killed since the Saudi-UAE-led military coalition intervened against the Iran-aligned Houthi rebels and in support of President Abd-Rabbu Mansour Hadi‘s government in March 2015.

The conflict in Yemen broke out in late 2014 when Houthis seized much of the country, including the capital, Sanaa. The war is widely seen as a proxy battle between regional rivals Saudi Arabia and Iran. 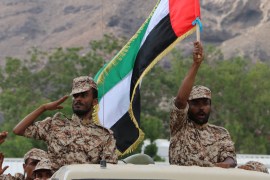 Analysts say UAE’s surprise pullout may strain ties with ally Saudi Arabia at a time of heightened tensions with Iran. 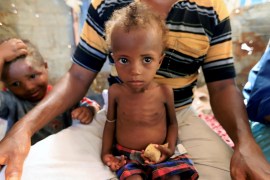