US Vice President Mike Pence on Thursday called out ally Saudi Arabia for the suppression of religious liberties and urged it to release Raif Badawi, a blogger imprisoned for reportedly insulting Islam.

Pence’s highlighting of Badawi’s ill-treatment comes in light of US legislators accusing the Trump administration of failing to act against the kingdom’s leaders for the killing of Saudi journalist Jamal Khashoggi.

In an address to the Ministerial to Advance Religious Freedom conference at the State Department, Pence noted the detention of religious dissidents in Eritrea, Mauritania, Pakistan, and Saudi Arabia.

“All four of these men have stood strong in defence of religious liberty despite unimaginable pressure, and the American people stand with them,” Pence said.

“The United States calls upon the governments of Eritrea, Mauritania, Pakistan and Saudi Arabia to respect the freedom of conscience and let these men go.”

Republican and Democratic legislators – citing evidence of Saudi Crown Prince Mohammed bin Salman‘s role in the Khashoggi case, and incensed over the civilian death toll from the Saudi-led air campaign in Yemen that has killed thousands – have ramped up efforts to block President Donald Trump‘s arms sales to Saudi Arabia.

The CIA has determined with “medium to high confidence” the Saudi crown prince, considered the de facto ruler of the kingdom, ordered the grisly killing of Khashoggi at its Istanbul consulate last year.

Badawi, who set up the Free Saudi Liberals website, was arrested in June 2012 for offences that included cybercrime and disobeying his father – an act considered an offence in Saudi Arabia.

The prosecution had demanded he be tried for apostasy, which carries the death penalty in Saudi Arabia, but a judge dismissed that charge.

His public flogging in 2015 generated a global outcry.

Pence also cited the detention of a 90-year-old Orthodox Church patriarch by Eritrea, the jailing for apostasy of Mohamed Ould Cheikh Ould Mkhaitir, a blogger in Mauritania, and the imprisonment by Pakistan of Junair Hafeez, a lecturer accused of blasphemy.

The case of the Pakistani lecturer is likely to be raised next week in meetings in Washington between Trump administration officials and Pakistani Prime Minister Imran Khan in his first-ever meeting with the US president. 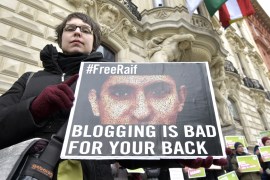 Appeal made for release of Raif Badawi, imprisoned and lashed for insulting Islam, so that he can accept Sakharov Prize. 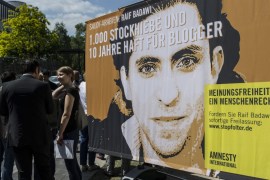 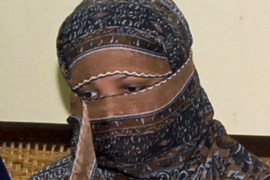 Held in protective custody since her acquittal after eight years on death row, Bibi leaves citing threats to her life.