Politicians, public figures and activists in the United States and elsewhere have rallied behind Representative Ilhan Omar as President Donald Trump stepped up attacks against her and other Democratic congresswomen of colour.

In a re-election campaign rally on Wednesday, the first since his racist tweets over the weekend in which he told the four congresswomen to “go back” to where they came from, the crowd chanted, “Send her back!”, referring to Omar, and Trump made no attempt to stop the the rally attendees.

At the rally in Greenville, North Carolina, Trump also termed the four politicians – Omar, Alexandria Ocasio-Cortez, Ayanna Pressley and Rashida Tlaib as un-American and said they should leave the US if they did not like his policies on issues such as immigration and defence of Israel. All four are US citizens and all except for Omar were born in the US.

Omar responded to the chants on Twitter by quoting a poem by the late civil rights activist Maya Angelou.

Following the Trump rally, Senator Bernie Sanders, a Democratic presidential hopeful, tweeted his support for Omar under the hashtag  #IStandWithIlhan, which trended at number one in the US. He said he is proud to work with her in Congress.

“Trump is stoking the most despicable and disturbing currents in our society,” he added.

“And that very hatred and racism fuels him,” he said. “We must fight together to defeat the most dangerous president in the history of our country.”

“It defiles the office of the president,” she tweeted. “It’s time to get Trump out of office and unite the country.”

Elizabeth Warren, a fellow Democratic senator and presidential candidate, called Trump “desperate” and urged the initiation of impeachment proceedings to hold him accountable.

“Calling out his racism, xenophobia, and misogyny is imperative,” she tweeted. “But he’s trying to divide us and distract from his own crimes, and from his deeply unpopular agenda of letting the wealthy and well-connected rip off the country.”

Bend the Arc, a progressive Jewish American movement, said Omar deserves to be safe and have her leadership respected.

“Our Jewish community has your back,” the group said on Twitter. “Sending love to you and our Muslim family tonight. We will keep fighting white nationalism and fascism in all its forms together.”

Actress Piper Perabo also tweeted her support of Omar, calling her a “good mother, citizen, friend and an important member of Congress”.

#IStandWithIlhan She is a friend.
We have talked about Minnesota voters, who she cares about. She cares about students. She supports women. She supports other civically engaged women (that’s how we met!) She is a good mother, citizen, friend and an important member of Congress. pic.twitter.com/NPZLukTRXM

The outpouring of support for Omar was not limited to the US. Paul Mason, a British commentator and radio personality on economics and social justice, called on “Britain, Europe, the world” to stand with Omar.

A similar hashtag – #IStandWithIlhanOmar – trended earlier this year after Trump tweeted an edited video to suggest Omar was dismissive of the September 11, 2001 attacks in the US. After that tweet, Omar reported an increase of death threats.

Following Trump’s racist remarks over the weekend, the four minority congresswomen responded by saying, “We will not be silenced” and called Trump’s attacks a “distraction” from his policies.

On Tuesday, the same day the US House of Representatives voted to condemnTrump’s racist tweets, Omar introduced a bill affirming that US citizens have the right to take part in boycotts “in pursuit of civil and human rights.”

The bill, which does not mention the Boycott, Divestment, and Sanctions movement (BDS), is co-sponsored by Tlaib and civil-rights icon John Lewis, coincides with an anti-BDS resolution known as HR 246, which many Democrats are pushing for.

HR 246 has more than 330 co-sponsors and was co-authored by Republican representative Lee Zeldin, who has previously attacked Omar over her criticism of Israel’s policies.

Omar’s bill, known as HR 496, states that boycotts “have been effectively used in the United States by advocates for equal rights since the Boston Tea Party” and references historical moments when Americans participated in boycotts to push human rights in other countries such as the boycotting of Imperial Japan during the late 1930s, the boycotting of Nazi Germany from 1933 to 1941, and the boycotting of apartheid South Africa.

“It reassures us that progressives, including in Congress, are defending freedom of expression and the right of oppressed communities, including Palestinians, to peacefully fight for their rights,” Awwad said in a statement. 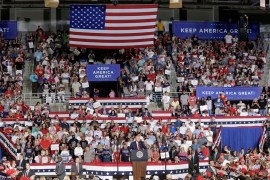 At first rally since announcing re-election bid, US president intensifies criticism of four Congresswomen of colour. 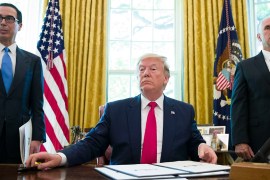