More than 100 people have been killed and millions of others forced from their homes across Nepal, India, Pakistan and Bangladesh as rain-triggered floods and landslides left a trail of destruction in parts of South Asia.

The death toll was the highest in Nepal, where torrential rains unleashed mudslides and caused rivers to overflow, killing at least 67 people and leaving 30 others missing, officials said on Monday.

The annual deluge, which hit the country on Thursday and has impacted around a third of all districts, has so far displaced at least 10,000 people there.

The downpours have eased but authorities still fear the death toll could rise, according to police spokesman Bishwaraj Pokharel.

“There are the challenges of resettlement of the displaced as many houses … have been swept away. We are also cautious about the risk of epidemics due to polluted water,” Pokharel told AFP news agency.

The June to September monsoon causes widespread death and destruction across South Asia each year.

In the latest monsoon-related tragedy in India, a four-storey building on a hillside in the northern state of Himachal Pradesh collapsed due to heavy downpours, trapping those who had gathered for a party inside.

At least 14 people were killed, including 13 soldiers, according to a statement from the chief minister’s office.

Rescue workers used heavy machinery to remove heaps of mangled steel and wires from the muddied debris, pulling 28 survivors from the rubble.

Floods have also devastated much of the northeastern state of Assam, where some 4.3 million people have been forced from their homes in the last 10 days due to rising waters across the mostly rural region, according to a government release on Monday.

“The flood situation has turned very critical with 31 of the 32 districts affected,” Assam Chief Minister Sarbananda Sonowal told reporters. “We are working on a war footing to deal with the flood situation.”

The state’s Kaziranga National Park, a UNESCO-recognised reserve and home to two-thirds of the world’s one-horned rhinos, has also been seriously affected by the weather.

Nearly 80 percent of the park was flooded by the mighty Brahmaputra river, which flows along the sanctuary, forest officer Jutika Borah told The Associated Press news agency.

In the eastern state of Bihar, five rivers were flowing over the danger levels with more rain forecast for the next few days. A state government release cited by Reuters news agency said some 1.9 million people had fled their homes, with tens of thousands taking shelter in more than 150 state-run relief camps.

Bangladesh, a low-lying delta nation of 160 million people with more than 130 rivers, is prone to monsoon floods because of overflowing rivers and the heavy onrush of water from upstream India.

At least 29 people have died in the last week, including two Rohingya refugees, 18 people who were hit by lightning in different parts of the country and seven who drowned after their boat capsized in choppy waters in the Bay of Bengal.

Another 500,000 people have been forced to leave their homes in Bangladesh’s southern Chittagong district after the flooding of some 200 villages.

In the overcrowded refugee camps in Bangladesh’s Cox’s Bazar district – home to nearly one million Rohingya who have fled a military crackdown in Myanmar – nearly 5,000 tarpaulin and bamboo homes were destroyed after heavy rains triggered mudslides on the hill slopes, according to a spokeswoman for the International Organisation for Migration.

Thousands of Rohingya have been left without shelter because of the heavy rains.

Displaced refugees said they were suffering as rain disrupted logistics and daily activity in the camps.

“It’s tough to go to food distribution centres by wading through a swamp of mud,” Nurun Jan, a Rohingya refugee, told AFP news agency. “Rains and gusty wind have made our life miserable.”

Refugees also described a shortage of drinking water and a looming health crisis due to flooded toilets, which foster disease outbreaks. 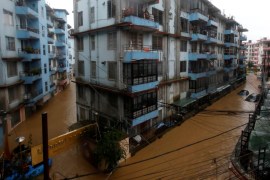 More deaths in monsoon-hit Nepal due to flooding, landslides

Rains have hit 30 of the country’s 77 districts over the past week as delayed monsoon rains pound the region. 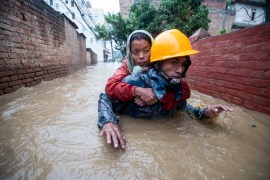