The bomb went off during the morning rush hour in Kabul when the streets were filled with people, injuring 105 people, including 51 children and five women, government authorities said on Monday.

Mohammad Karim, a police official present at the site of the attack, said the bomb-laden truck exploded outside a defence ministry building.

At least three fighters then ran into a nearby high-rise located near the ministry’s engineering and logistics department, a security official said, leading to a gun battle that lasted more than seven hours.

“Clashes ended with the death of all five attackers,” said interior ministry spokesman Nasrat Rahimi, adding that more than 210 people were rescued during the operation.

Taliban claimed responsibility, with spokesman Zabuhullah Mujahid saying in a statement that the group attacked “the logistics and engineering centres” of the ministry of defence.

The statement further said the explosion caused “heavy casualties to a number of civilian people,” but added that the target of the attack was military, not civilian.

The United Nations, NGOs working in Afghanistan and the Afghan government have all criticised the Taliban for causing civilian casualties.

“I was sleeping when I heard a huge blast, immediately after that the roof of my room fell on me, leaving me injured,” Ikram, a witness, told Al Jazeera.

“Just a 100 metres away, I saw from my window that fighters were conducting more blasts and shooting. I went out to check on my grandmother and mother, who were both stuck under the rubble after the roof fell on them as well.”

Another witness Ismatullah Amanzai told Al Jazeera that his friend passed away in one of the blasts that happened near his garage.

“I tried calling him when the blast took place but he did not pick up, we found out from the hospital officials that he passed away from his injuries,” he said.

At least 51 children in two schools near the blast site were hurt by flying shards of glass, said Nooria Nazhat, a spokeswoman of the education ministry.

“These children were in the classrooms when the blast shattered the glass windows. All injured children were rushed out of their schools,” said Nazhat.

Afghans decried the attack on social media, with many sharing photos of the injured children. Some photos purportedly taken at a hospital showed wounded, stunned children in school uniforms, still clutching books as they arrived for treatment.

In its statement, the education ministry said five schools had been partially damaged, and asked “all sides involved in fighting to guarantee the safety of students, teachers, education workers and schools”.

Onno van Manen, Save the Children’s Afghanistan country director, said his organisation found that a “staggering 80 percent of conflict-related child deaths” in the country are the result of explosive weapons.

“Afghanistan is one of the most dangerous places in the world to be a child,” he said. “Children are once again paying the price for nearly two decades of conflict in Afghanistan.”

The attack came just two days after the Taliban began a seventh round of talks with the United States in Qatar as Washington eyes a breakthrough before Afghanistan’s September presidential election.

The negotiations so far have centred on four issues – counterterrorism, the foreign troop presence, an intra-Afghan dialogue and a permanent ceasefire.

A potential deal would see the US agree to withdraw its troops after nearly 18 years in Afghanistan, igniting deep concerns among many Afghans who fear the fighters will return to some semblance of power.

In return, the Taliban would guarantee the country would never again become a safe haven for violent groups, as happened with Al-Qaeda before the September 11, 2001 attacks. 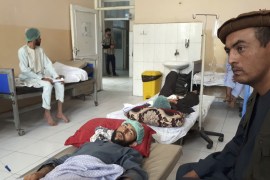 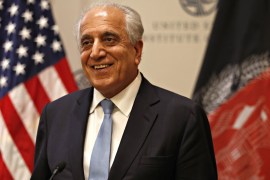 US and Taliban announce new round of talks in Qatar

US envoy Zalmay Khalilzad and Taliban confirm the next round of US-Taliban talks will begin in Doha on June 29. 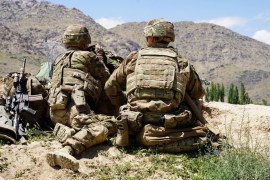