Iran has exceeded the limit on the amount of enriched uranium in its stockpile set out in the 2015 nuclear deal with world powers, the United Nations’ atomic watchdog has confirmed.

The International Atomic Energy Agency (IAEA) said on Monday that its inspectors had verified the 300kg cap had been breached.

“We can confirm that IAEA Director General Yukiya Amano has informed the Board of Governors that the Agency verified on 1 July that Iran’s total enriched uranium stockpile exceeded [the deal’s limit],” an IAEA spokesman said in a statement.

Zarif later said Iran’s accumulation of more enriched uranium than permitted under the deal was not a violation of the pact, however, since it was exercising its right to respond to a unilateral US withdrawal from the agreement last year, after which Washington reimposed punishing sanctions on Tehran.

“We have NOT violated the #JCPOA,” Zarif said in a Twitter post, referring to the nuclear deal by its formal title, the Joint Comprehensive Plan of Action (JCPOA).

“Para 36 of the accord illustrates why. We triggered & exhausted para 36 after US withdrawal. We gave E3+2 a few weeks while reserving our right. We finally took action after 60 weeks. As soon as E3 abide by their obligations, we’ll reverse,” he added.

Zarif tweeted the message along with the text of paragraph 36 of the JCPOA – which provides a mechanism to resolve disputes when parties believe other signatories are not fulfilling their obligations. The E3 refers to Germany, Britain and France, while the E3+2 also includes Russia and China, which combined make up the remaining parties to the deal.

‘The Europeans have failed’

Since the US withdrawal, Washington and Tehran have been embroiled in an escalating war of words, with fears of a possible US-Iran conflict heightened by the downing of a US drone last month by  Iran’s Islamic Revolutionary Guard Corps (IRGC), after which US President Donald Trump called off retaliatory attacks at the last minute.

On Monday, the US said it would continue its policy of maximum pressure on Tehran until “its leaders alter their course of action” and said Washington and its allies would never allow Iran to develop nuclear weapons.

“We must restore the longstanding nonproliferation standard of no enrichment for Iran,” the White House said in a statement. “The regime must end its nuclear ambitions and its malign behavior.”

Amid the increased friction in recent weeks, Iranian officials had warned that Tehran was set to breach the stockpiling limit, saying the remaining signatories to the nuclear deal – Germany, France, the United Kingdom, China and Russia – had not done enough to protect Tehran from the bite of economic sanctions despite attempts to save the seemingly imperilled accord.

European allies who support the nuclear deal have argued Trump’s decision to quit the accord was a mistake that has strengthened Iran’s hardline faction, weakened its pragmatists and raised the prospect of open conflict in the Middle East.

“The Europeans have failed to fulfil their promises of protecting Iran’s interests under the deal,” Zarif said on Monday, according to the state-run Iranian broadcaster IRIB.

He added that Tehran’s next step would be to enrich uranium beyond the 3.67 percent cap allowed by the accord.

Al Jazeera’s Zein Basravi, reporting from Tehran, said it was a “very fragile time for the 2015 nuclear deal”, adding the breaching of the enriched uranium limit signalled a “significant moment”.

“It is the first time we see something that we see which we can point to and say that is a clear reduction of cooperation with the 2015 nuclear deal,” Basravi said.

Other signatories to the deal reacted with distress later on Monday to Tehran’s move.

UK Foreign Secretary Jeremy Hunt said he was “deeply worried” that Iran had “broken existing nuclear deal obligations” and pledged to further reduce its compliance with the agreement.

‘[The] UK remains committed to making deal work & using all diplomatic tools to deescalate regional tensions. I urge Iran to avoid any further steps away from JCPoA & come back into compliance,” Hunt said in a Twitter post.

Deeply worried by Iran’s announcement that it has broken existing nuclear deal obligations. UK remains committed to making deal work & using all diplomatic tools to deescalate regional tensions. I urge Iran to avoid any further steps away from JCPoA & come back into compliance.

He urged all parties to “avoid escalation,” saying the development “causes regret, but shouldn’t be overdramatised” and describing it as a “natural result” of the US’s maximum pressure campaign against Tehran.

Ryabkov added that Iran was facing “unprecedented and unthinkable” US sanctions, including an oil trade embargo, which he said were an attempt to “strangle” the country.

But Israeli Prime Minister Benjamin Netanyahu said Iran’s move to break limits on its stockpile of low-enriched uranium was a “significant step toward making a nuclear weapon” and called on European countries to “stand by commitments” to impose sanctions against Tehran for violating the nuclear deal.

Netanyahu, a longtime critic of regional rival Iran, said that Israel would “soon unveil more proof that Iran was lying all the time” about its nuclear programme. 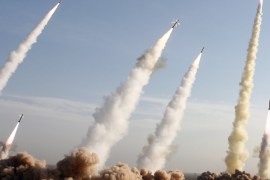 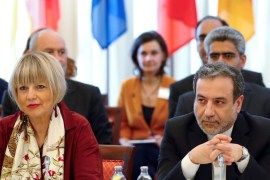 Nuclear talks progress ‘not enough’ for Iran to change course

INSTEX payment system now operational, but Iran says needs to be used for oil purchases to be useful.