Washington, DC – A bipartisan group of seven influential United States senators said on Wednesday they intend to force congressional votes on 22 resolutions that would block President Donald Trump‘s recently-announced sales of US weapons to Saudi Arabia and the United Arab Emirates (UAE).

Secretary of State Mike Pompeo had informed Congress on May 24 the Trump administration was declaring a national security emergency in order to waive congressional review of $8.1bn in arms sales to Saudi Arabia and the UAE. Pompeo cited military tension with Iran for the emergency declaration, prompting senators to dispute the validity of Pompeo’s claim.

“Congress has an essential oversight role in the decision to sell weapons and we must ensure proper procedures are in place in any weapons transfer,” Senator Todd Young, a member of the Republican leadership team in the Senate, said in a joint statement issued by the senators on Wednesday.

“In light of the ongoing humanitarian crisis in Yemen, we have an obligation to ensure the adequate guardrails are in place and that weapons transfers to Saudi Arabia and the United Arab Emirates do not exacerbate the conflict,” Young said, adding alleged threats from Iran “do not justify” the Trump administration sidestepping Congress.

Congress has repeatedly blocked sales of certain military equipment to Saudi Arabia and the UAE, pointing to the huge civilian death toll from the Saudi Arabia-UAE air campaign in Yemen, as well as human rights abuses.

Other senators vowing to block the weapons transfers include Republicans Lindsey Graham and Rand Paul and Democrats Bob Menendez, Chris Murphy, Patrick Leahy and Jack Reed. The group said it is introducing 22 separate resolutions of disapproval for each of 22 different weapons systems the Trump administration approved for transfer to Saudi Arabia, the UAE and Jordan.

“While I understand that Saudi Arabia is a strategic ally, the behaviour of [Saudi Crown Prince] Mohammed bin Salman (MBS) cannot be ignored. Now is not the time to do business as usual with Saudi Arabia,” Senator Graham said.

Politicians have expressed anger over Trump’s handling of the US’s strategic relationship with Saudi Arabia after the October murder of Saudi journalist Jamal Khashoggi.

Khashoggi was killed on October 2, 2018, inside the Saudi consulate in Istanbul, Turkey. According to politicians, US intelligence agencies have concluded that MBS ordered the murder of Khashoggi – a conclusion the Saudi kingdom denies.

The weapons sales include precision-guided missiles manufactured by Raytheon that have been blamed for civilian casualties in the Saudi-UAE air war in Yemen. Other weapons include Javelin anti-tank missiles, support for F-15 and F-16 fighter jets, and precision guidance parts for Paveway IV bombs used on Eurofighter and Tornado combat jets used by Saudi Arabia.

“Selling more bombs to the Saudis simply means that the famine and cholera outbreak in Yemen will get worse, Iran will get stronger, and al-Qaeda and ISIS will continue to flourish amidst the chaos of the civil war,” Senator Murphy said, referring to the Islamic State of Iraq and the Levant (ISIL or ISIS).

Pompeo has said the weapons sales were needed because a delay could increase the risk for US allies at a time of instability caused by Iran.

“Regrettably, Secretary Pompeo’s abuse of this emergency authority has broken the arms sales process,” Senator Menendez said in the statement.

“The best thing the secretary of state can do right now is, withdraw his emergency certification, immediately submit these sales for the normal Congressional review and engage with senators to address our concerns,” Menendez said.

“Failing that, I am prepared to move forward with any and all options to nullify the licenses at issue for both Saudi Arabia and [the] UAE and eliminate any ability for the administration to bypass Congress in future arms sales,” he said.

Timing of any votes in the full Senate would depend on how quickly sponsors of the resolutions can move through the Foreign Relations Committee, possibly as soon as late June or July. 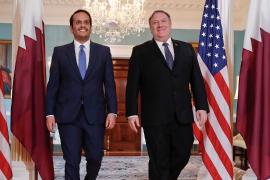 Qatar blockade: US shows support for both Qatar and Saudi Arabia

Over the past two years, the US government has bolstered its support for both Qatar and Saudi Arabia.

US OKed nuclear power sharing with Saudi ‘after Khashoggi murder’

US Senator Tim Kaine says Trump administration granted one of the authorisations 16 days after Khashoggi was killed. 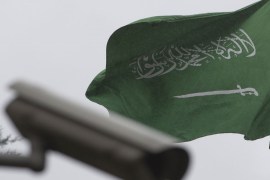