June 1 was the official start of the Atlantic hurricane season and the tropics are beginning to stir right on schedule.

A weak disturbance started to develop at the beginning of the week just off the eastern coast of Mexico in the Bay of Campeche with rain showers spiralling around the centre of circulation.

Some of those associated storms caused flash flooding well inland when the San Gabriel River in Jalisco overflowed its banks. Floodwaters and mudslides damaged homes and vehicles leaving at least two people dead and five missing.

The National Hurricane Center that monitors the region for storms has now dropped the likelihood of a development for this system, but the threat of flooding is not over.

As the area of disturbed weather continues to track north along to the Texas coastline, plentiful amounts of moisture will also be pulled northward.

Rainfall rates of 25-75 millimetres per hour will be possible with some of the storms from Wednesday through Friday. Most at risk for flooding will be the US states of Texas, Louisiana and Mississippi.

Flash-flood alerts have already been issued along the Gulf Coast from Victoria, Texas, to Baton Rouge, Louisiana.

The city of Houston is extremely vulnerable to flooding as up to 200mm of rain could be seen locally within the next 72 hours.

Much of the region will see heavy rain in the coming days and has already experienced historic flooding from rounds of severe storms in May. 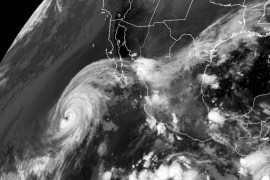 Hurricane Rosa to bring flash floods to Mexico, US

It has been an above average tropical season for the eastern Pacific.