Palestinians have condemned the attendance of two United States officials at the inauguration of a tunnel at a contested archaeological site in occupied East Jerusalem that was organised by an Israeli settler-linked group.

White House adviser Jason Greenblatt and Ambassador to Israel David Friedman took part in Sunday’s event, which marked the completion of the project next to the Old City in the neighbourhood of Silwan, according to the group, the City of David Foundation.

In a statement, the Palestinian Foreign Ministry said it viewed “the American attendance and celebration of the Judaisation activities in occupied East Jerusalem as hostile acts against the Palestinians”.

“The administration of President Donald Trump proves day by day its … unlimited affiliation to the colonial settlement project led by the extremist right in the state of the occupation (Israel),” it said.

Israel occupied East Jerusalem in the 1967 war and later annexed it in a move never recognised by the international community. It sees the entire city as its capital, while the Palestinians see the eastern sector as the capital of their future state.

US President Donald Trump in 2017 broke with decades of US policy by recognising Jerusalem as Israel’s capital and later moving its capital there from Tel Aviv.

The White House, which has also cut hundreds of millions of dollars in Palestinian aid, organised last week an economic conference in Bahrain meant to kickstart a long-awaited Middle East peace effort – but the Palestinians boycotted it.

Friedman has been a supporter of Israeli settlements, which are considered illegal under international law, and Greenblatt last week said he preferred to call them “neighbourhoods and cities”.

Called the “Path of Pilgrims”, the tunnel was excavated during the last six years by the Israel Antiquities Authority. It was found in 2004 during repairs after a sewage pipe burst in the middle of the Silwan neighbourhood.

The City of David Foundation says the tunnel served as a pilgrimage route to the second Jewish temple in Jerusalem some 2,000 years ago.

Greenblatt dismissed accusations that the US officials’ attendance at the event was further acknowledgement of Israeli sovereignty over occupied East Jerusalem.

The Palestinian Authority “claims our attendance at this historic event supports ‘Judaisation’ of Jerusalem/is an act of hostility vs. Palestinians. Ludicrous,” he wrote on Twitter.

“We can’t ‘Judaise’ what history/archaeology show. We can acknowledge it you can stop pretending it isn’t true! Peace can only be built on truth.”

Friedman said at the ceremony that the excavation project uncovered “the truth, whether you believe or not … the truth is the only foundation upon which peace will come to this area”.

After his speech, Friedman, along with Greenblatt, Prime Minister Benjamin Netanyahu‘s wife, Sara, and donors to the project, wielded hammers to break through a wall and open the subterranean path to the holy site revered by Jews as the Temple Mount and by Muslims as the al-Aqsa compound.

In its statement, the Palestinian foreign ministry condemned “in the strongest terms the colonialist plans to replace the existing reality in occupied Jerusalem and the environs of the Old City”.

Erasing line between East and West

Al Jazeera’s Bernard Smith said this was the first time the US had sent its representatives to East Jerusalem, “recognising that all of Jerusalem is the capital of Israel”.

“[With] the Americans, walking into East Jerusalem, they’re erasing the difference between East Jerusalem and West Jerusalem. The Palestinians say it’s all part of an Israeli plan to try to erase their heritage, their history on this land,” said Smith, reporting from East Jerusalem.

“Palestinians say Israel is trying to make this city more important for one group than for others.”

The project’s parent group, Elad, helps settle Jewish families in Palestinian neighbourhoods, raising suspicions that its tourism projects have a deeper agenda of erasing the lines between East and West Jerusalem.

Observers said the presence of Friedman and Greenblatt was likely to deepen suspicions that the US supported “Judaising” East Jerusalem.

“We are in a time that Israel feels very, very free to advance its strategic aims in East Jerusalem,” said Aviv Tatarsky, a researcher at Ir Amim, an advocacy group that pushes for equality between Palestinian and Jewish residents of the city.

Emek Shaveh, an Israeli group that opposes the “politicisation” of archaeology, also condemned the US presence, calling it “a political act which is the closest the US will have come to recognising Israeli sovereignty over the Old City basin of Jerusalem”.

Critics have accused operators of the sites of pushing a nationalistic agenda at the expense of Palestinian residents. 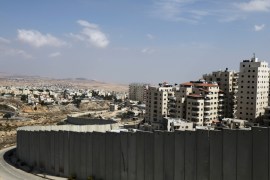 Concerned that Jerusalem will soon have a non-Jewish majority, Israel may excise Palestinian areas of East Jerusalem. 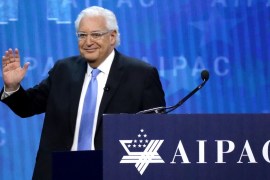 In an interview with the NYT, David Friedman said some degree of annexation of the West Bank would be legitimate.