The top diplomat of the United States has reportedly called the US administration’s long-awaited Israel-Palestine peace plan arguably “unexecutable” in comments delivered just weeks before a Washington-led economic conference in Bahrain, where the first part of the initiative is due to be unveiled.

The Washington Post reported on Sunday it had obtained an audio recording of Mike Pompeo in which the US secretary of state told Jewish leaders that the still-secret plan might not “gain traction” and critics might reject it as not “particularly original”.

Speaking in a closed-door meeting on Tuesday of the Conference of Presidents of Major American Jewish Organizations, Pompeo reportedly said: “I get why people think this is going to be a deal that only the Israelis could love.

“I understand the perception of that. I hope everyone will just give the space to listen and let it settle in a little bit.”

“This is a big climbdown from the initial rhetoric of the ‘ultimate deal’,” Hudson said from Washington, DC, adding that Pompeo was “very much acknowledging that this could definitely not pan out”.

Since President Donald Trump announced plans for the peace proposal, which he has entrusted to his son-in-law Jared Kushner and former lawyer Jason Greenblatt, the US has taken a number of steps that have been vehemently denounced by the Palestinians, including unilaterally recognising Jerusalem as Israel’s capital without a final-status agreement and moving the US embassy there from Tel Aviv.

The moves led the PA, which governs the occupied West Bank, to cut off relations with the US last year, accusing it of having a thoroughly biased relationship with Israel.

The Palestinian leadership, which has criticised the peace proposal, was not consulted about the upcoming conference in Manama, which is not expected to address the core political issues of the conflict: final borders, the status of Jerusalem, or the fate of Palestinian refugees.

The PLO, meanwhile, has dismissed the Kushner effort as an attempt to bribe Palestinians into accepting Israeli occupation of the West Bank, a prelude to Israel annexing about half their territory and leaving them with scattered cantons.

PLO official Hanan Ashrawi wrote on Twitter that the Kushner plan and the Bahrain conference in late June were just “a handout to make our captivity palatable”.

Hamas, which administers the besieged Gaza Strip, has also rejected the US peace plan.

Palestinian businesspeople have opposed the Bahrain gathering despite a plea by Washington to attend, saying their political demands must be addressed in any peace plan.

Qatar said economic prosperity cannot be achieved without political solutions acceptable to Palestinians, while Oman said anything that precludes the establishment of a Palestinian state would not be acceptable.

Although Kushner has been drafting the plan for two years under a veil of secrecy, it is seen by Palestinian and some Arab officials as tilting heavily in Israel’s favour and denying them a state of their own.

Jeffrey Stacey, a geopolitical analyst and a former US State Department official, said he believed the White House plan was doomed to fail, while also expressing his surprise at how candid Pompeo was in his comments.

“It’s remarkably revealing, it’s almost shocking, that he, as the chief diplomat of the United States of America, would let that slip – even in a private meeting, he should be a little more aware,” he told Al Jazeera from Washington, DC.

Stacey said the initiative was “not going to get anywhere”, adding that it was “absolutely being received with the coldest of responses”.

“It’s dead on arrival and Pompeo is actually, to our surprise, revealing that his own personal opinion on this is that it’s not going to go very far at all.”

Still, in a TV interview that was aired on HBO on Sunday, Kushner appeared to express optimism about the proposal. Kushner was asked why Palestinians should trust the Trump administration in the interview on Axios programme.

“The actions we’ve taken were because America’s aid is not an entitlement,” said Kushner, who is also widely distrusted by the Palestinians for his family ties with Israeli Prime Minister Benjamin Netanyahu.

“If we make certain decisions, which we’re allowed to as a sovereign nation to respect the rights of another sovereign nation and we get criticised by that government, the response of this presidency is not, ‘so let me give you more aid. So that was as a result of decisions made by the Palestinian leadership.”

“Asked whether he understood why the Palestinians might not trust him, Kushner said, “I’m not here to be trusted”, adding that he believed the Palestinian people would judge the plan based on whether “they think this will allow them to have a pathway to a better life or not”.

Kushner said the Palestinians deserve “self-determination”, but stopped short of backing Palestinian statehood and expressed uncertainty over their ability to govern themselves. He said it would be a “high bar” when asked if the Palestinians could expect freedom from Israeli military and government interference.

Kushner again avoided saying explicitly whether the plan would include a two-state solution, the bedrock of US policy for decades, calling for a Palestinian state in the West Bank and Gaza Strip, with its capital in East Jerusalem.

But he said: “I do think they should have self-determination. I’m going to leave the details until we come out with the actual plan.” 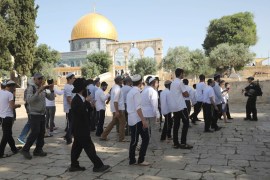 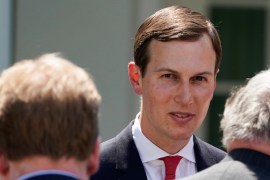 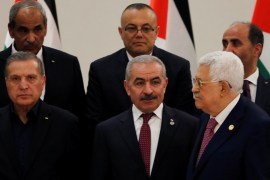 ‘This is not a peace plan’: Palestinians shun Bahrain conference

US officials set to unveil the first part of Trump’s long-awaited Israeli-Palestinian peace plan in Manama next month. 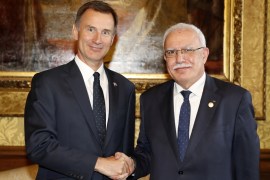