Military officials with Libya‘s UN-recognised government say they have seized US-made weapons at a base they captured from forces loyal to renegade military commander Khalifa Haftar in Libya, prompting an investigation by the US Department of State.

The Tripoli-based Government of National Accord (GNA) on Wednesday retook Gharyan, a strategic town south of the capital, from Haftar’s self-styled Libyan National Army (LNA).

The GNA said that among the weaponry its forces seized were a number of US-made Javelin anti-tank missiles packed in wooden crates marked “armed forces of the United Arab Emirates” (UAE). Libyan media also aired footage that appeared to show markings that indicated that the US-made weapons were originally sold to the UAE – a major buyer of US weapons and one of Haftar’s main international supporters – in 2008.

“The seized weapons and ammunition have been sent to the specialised experts and have been documented,” Mohammed Qununu, spokesman for the GNA’s military operation, told reporters on Saturday in Gharyan.

“The military commanders and the political leaders are now fully aware of these weapons and ammunition to make the right decisions that will be announced.”

Also included was Chinese GP-1 155mm Guided Artillery Shells, known to be in Libya & other arms marked as from the UAE.

Reporting from Tripoli, Al Jazeera’s Mahmoud Abdelwahed said the GNA had launched a fact-finding mission with the goal of documenting the seized weapons and producing a report that would be submitted to international institutions such as the UN and possibly countries like the US.

“Government forces showed off dozens of US-made anti-tank missiles. They said [the weapons] were seized from Haftar’s forces in Gharyan … [and] were supplied by the UAE,” Abdelwahed said, noting that the Gulf country has long supplied weapons to Haftar, including unmanned drones, as well as armed vehicles and fighter jets.

There was no immediate comment from the UAE. A New York Times report said the UAE’s ambassador to the US, Yousef al-Otaiba, had declined to answer questions about the provenance of the missiles.

If the UAE did provide the weapons to Haftar’s forces, it would likely be a violation of arms sales agreements with the US.

A spokesperson from the US State Department said in a statement sent to Al Jazeera: “We take all allegations of misuse of US origin defence articles very seriously.”

The statement added: “We are aware of these reports and we are seeking additional information. We expect all recipients of US origin defence equipment to abide by the end-use obligations.”

Douglas Ollivant, a defence analyst and managing partner at the consulting firm Mantid International, told Al Jazeera that the UAE’s support to Haftar “is a known-known”.

“That the Emirates would choose to violate the terms of US weapons sales, rather than transferring weapons from China or Russia that don’t have these terms attached to them, is slightly surprising,” he said from Falls Church, Virginia.

“That the Emirates would feel, if these reports are true, that they can transfer these weapons without consequence or believe that they would be undiscovered, neither of those seems very likely in the long term”, Ollivant added.

“When the US Congress approves a weapons sale to a foreign government, it approves a certain weapons system and a number of those systems to a certain government, being very cognizant of what that does for military balance in the region. So for a government to take those weapons and then transfer them to someone else for whom they were not intended, my guess is that the US Congress will take that very seriously.” 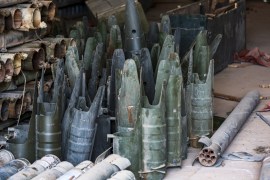 Renegade general’s threat come as Washington investigates how US-made weapons got into the hands of his fighters. 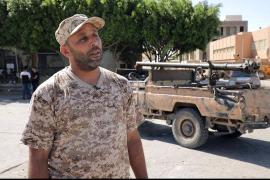 Gharyan is back under the control of the UN-recognised government after being used as a base to launch attacks on the capital Tripoli.