A meeting in Vienna among the remaining signatories of the embattled nuclear deal between Tehran and world powers may be the “last chance” to save the historic accord, Iran has warned.

In comments carried by Iran’s Fars News Agency, Ministry of Foreign Affairs spokesman Abbas Mousavi said the gathering in the Austrian capital on Friday was an opportunity to see how those still party to the 2015 agreement could “meet their commitments towards Iran”.

Concerns abound the deal will collapse after the United States unilaterally withdrew from the accord a year ago and reimposed punishing sanctions on Iran. Fears remain that an Iran-US conflict could break out after a US drone was shot down last week and US President Donald Trump called off retaliatory attacks at the last minute.

Mousavi said despite supporting Iran in several statements, the remaining signatories – the United Kingdom, France, Germany, China and Russia – failed to take any action to shield its faltering economy from US sanctions.

Tehran has threatened to breach the limit of its stockpile of low-enriched uranium mandated under the deal in retaliation to the US approach, which has also seen Trump attempt to choke Iranian oil exports amid a spiralling war of words between Washington and Tehran over multiple flashpoints in the Middle East.

Iran’s desire for Europe to deliver on promises of financial relief from US sanctions that are crippling its economy was a key factor in Friday’s meeting.

After three hours of talk, Chinese delegate Fu Cong said Iran had agreed to stay in the nuclear agreement.

“We heard the Iranian side loud and clear that they will remain in this agreement,” Cong said, adding that the EU announced that a complex system meant to maintain trade with Tehran has been “operationalised”.

‘We want to sell our oil’

“What is our demand? Our demand is to be able to sell our oil and get the money back. And this is in fact the minimum of our benefit from the deal,” the official said. “We are not asking the Europeans to invest in Iran … We only want to sell our oil.”

The US on Friday vowed to choke off all of Iran’s oil exports.

“We will sanction any imports of Iranian crude oil… There are right now no oil waivers in place,” Brian Hook, the US envoy on Iran, told reporters in London.

“We will sanction any illicit purchases of Iranian crude oil.”

Hook said Washington was on track to deprive Tehran of $50bn in oil revenues, and told European companies to choose between doing business with the United States or Iran.

The US will study reports of Iranian crude clandestinely going to China, Hook added.

Iran’s crude exports dropped to about 300,000 barrels a day (bpd) in the first three weeks of June, according to industry sources, from above 2.5 million bpd in April 2018 before Trump quit the accord.

Amid falling revenues and in a bid to rescue the deal, Iran’s European partners are expected to announce the creation of a multimillion-dollar credit line to Tehran at the Vienna summit.

The measure is aimed at keeping economic ties between European governments and Tehran alive by kickstarting a trading mechanism known as INSTEX – Instrument in Support of Trade Exchanges – that is designed to enable barter trade between Iran and the West, unnamed officials told the Wall Street Journal on Thursday.

INSTEX is not yet operational and diplomats have said it will only be able to handle small volumes of items such as medicine – not the large oil sales Iran is seeking.

“We should see how much money can be transferred via INSTEX,” Mousavi said. “If it’s an artificial mechanism, Iran will surely not accept it.”

Iran is expected to surpass that limit in days.

Deputy Foreign Minister Abbas Araqchi, who is in Vienna, said Iran has run out of “strategic patience”, adding it won’t remain “unilaterally committed to the nuclear deal”.

Al Jazeera’s Dominic Kane, reporting from Vienna, said the Iranian government saw the meeting as key in its hope of making some progress with the European signatories to the deal regarding INSTEX.

“It is only functionnaries, high-ranked civil servants who work in the foreign ministries and who hammer out deals [that are present], but not the ministers, or the deputy ministers who would sign those deals.

“The question will be whether that sort of thing can be agreed by functionaries not by ministers,” Kane said.

European allies who support the nuclear deal say Trump’s decision to quit the accord was a mistake that has strengthened Iran’s hardline faction, weakened its pragmatists and raised the prospect of open conflict in the Middle East.

Data published  on Friday by Germany’s Funke media group showed trade between Germany and Iran has collapsed under the effect of the US sanctions, supporting Iran’s assertion that Europe is failing to help preserve the nuclear non-proliferation deal.

Figures from the German Chamber of Commerce showed trade volumes between Iran and the continent’s largest economy were down 49 percent over the first four months of this year, compared with the same period in 2018, with volumes continually declining.

French President Emmanuel Macron said he would try to convince Trump to suspend some sanctions on Iran to allow for negotiations to help defuse the crisis.

The pair are expected to hold talks at the ongoing annual summit of the Group of 20 (G20) nations in Osaka, Japan. 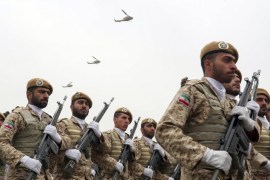 Iran’s foreign minister says US president is mistaken in thinking a war between two countries will be short-lived. 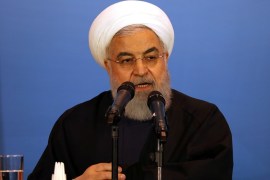 Iran’s Rouhani: US sanctions on Khamenei ‘idiotic and outrageous’ 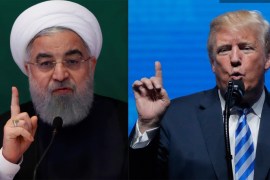 Has the door closed on diplomacy between Iran and US?