Iran said on Tuesday that a decision by the United States to impose “hard-hitting” sanctions on the country’s top leadership, including the supreme leader, has permanently closed the path to diplomacy between Tehran and Washington.

But the US National Security Adviser John Bolton said on Tuesday that President Donald Trump is open to negotiations and “all that Iran needs to do is walk through that open door”.

The US wants to hold talks to “verifiably eliminate Iran’s nuclear weapons programme, its ballistic missile delivery systems, its support for international terrorism and other malign behaviour worldwide,” Bolton said in Jerusalem.

He said US envoys have been in the region working to find a path to lowering tensions between the two countries, but that the silence of the Islamic Republic has been “deafening”.

Trump targeted Khamenei and other top Iranian officials with sanctions on Monday, in an unprecedented move to increase pressure on Iran after Tehran’s downing of an unmanned US drone last week.

has hired not diplomats but arsonists and has allowed them to run a very, very aggressive policy”]

The targets of the new sanctions include senior military figures in Iran, blocking their access to any financial assets under US jurisdiction. They also work to deny Khamenei’s and his close aides’ access to money and support.

‘The face of the Islamic Republic’

The Al Jazeera correspondent said the announcement that Iranian foreign minister would be sanctioned has come as a surprise here in Iran.

Tensions have escalated in the region in recent weeks following a series of attacks on oil tankers in the Gulf. The US and its regional allies – Saudi Arabia and United Arab Emirates (UAE) – have blamed Iran for the attacks – a charge Tehran has denied as “baseless”.

The downing of the US surveillance drone last week almost brought the two foes to the brink of war, with Trump saying he initially approved attacks on Iran in retaliation of the drone shootdown but later pulled back.

Tehran said the drone violated its airspace but Washington insisted it was flying over international waters in the Gulf.

The US president has said he is not seeking war with Iran, as he dispatched his top diplomats – US Secretary of State Mike Pompeo and National Security Advisor John Bolton – to the Middle East to shore up support against Iran.

Pompeo said he was hoping that more than 20 countries, including the UAE and Saudi Arabia, would work together on building maritime security in the Gulf, which is a source of major oil supplies in the world.

But Jarrett Blanc from Carnegie Endowment for International Peace, said that while the new sanctions will be largely symbolic, the underlying message could escalate the situation even further.

“Sanctions on the supreme leader and his office are almost certainly to be read in Iran as a confirmation that this administration is pursuing a regime change policy,” said Blanc who was a senior State Department official under President Barack Obama, who oversaw the implementation of the 2015 Iran nuclear deal.

Last year, Trump withdrew the US from the accord between Iran and world powers that curbed Tehran’s nuclear programme in exchange for easing sanctions. Relations in the region have worsened significantly since then.

“Even if President Trump denies it and even if other officials do not use that phrase. What is the targeting of leaders of the regime other than regime change?” he asked.

Blanc said that the message this administration is sending is “more likely to lead to escalation than de-escalation”.

“President Trump says, and I tend to believe, that he is not looking for war in the Middle East but he does not track the details of the situation, and he has hired not diplomats but arsonists and has allowed them to run a very, very aggressive policy.” 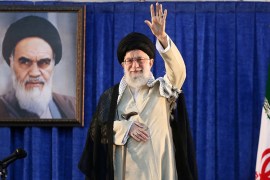