Opposition supporters and the few media outlets that back them are calling on the Republican People’s Party’s (CHP) Ekrem Imamoglu’s win in the Istanbul mayoral rerun vote a win for democracy.

Imamoglu won with close to a 10 percent margin. He had originally won the first vote on March 31 by less than 14,000 votes, but the election was invalidated and held again on Sunday.

The state-supported newspapers in Turkey, namely Milliyet, Yeni Safak, Turkgun and Star, seemingly could not come to terms with the AK Party’s loss, printing identical headlines on Monday that said: ‘Istanbul makes its choice’ or ‘Istanbul had its election”.

International markets appeared to approve the city’s choice for mayor. In the wake of Imamoglu’s win, the Turkish lira was up nearly two percent sitting at 5.717 lira against the dollar on Monday.

Any economic upturn is good news as Turkey recently entered into recession for the first time in a decade. The lira lost around a third of its value against the dollar last year.

The win for the opposition draws to a close the nearly two-decade long rule by the AK Party in Turkey’s largest metropolis.

Erdogan, who launched his political career as Istanbul’s mayor in the 1990s, took to Twitter after Yildirim conceded defeat, congratulating Imamoglu on his win.

“The national will has been manifested once again today. I congratulate Ekrem Imamoğlu who won the election according to informal results,” Erdogan wrote.

Imamoglu campaigned for the eradication of poverty, equal distribution of wealth, stood up for minorities, and declared his love for every single person of Istanbul.

He promised to make the municipality transparent again, improve transportation, ease the financial burden of mothers and students, increase employment and also make Istanbul a safe place to live.

Now after winning “the love of the children, the enthusiasm of the young [and] the prayers of the mother,” as he wrote on Twitter, Imamoglu has a massive job on his hands.

Tasci said Imamoglu is not as qualified to be mayor as his opponent, former Prime Minister Yildirim.

“People just voted for the promises … because they appeal to them… but I don’t think they’ll be able to get what they want from Imamoglu,” Tasci said.

“Erdogan can decide the way Imamoglu operates in the future because most projects will eventually require him to get Erdogan’s signature.”

Imamoglu addressed Erdogan during a news conference after his win on Sunday night saying: “I am ready to work with you in harmony.”

“I put myself up for that, and I announce this in front of all of Istanbul’s people.”

“[Erdogan] can cut funding and limit mayoral powers of Imamoglu, but ironically this will only strengthen Imamoglu’s brand as the ‘new Erdogan’,” Soner Cagaptay, an analyst at The Washington Institute for Near East Studies told Al Jazeera.

“I think the most exciting story of Turkish politics for the next four years is going to be Erdogan vs Imamoglu.”

Two hours after polling booths closed on Sunday, fireworks lit up the sky, and the streets in Turkey’s biggest city were jammed with Imamoglu’s supporters waving national flags, hanging out of car windows with horns blaring.

Footpaths were flooded as people chanted: “Everything is going to be very beautiful again,” echoing the victor’s campaign slogan

Spontaneous street parties lasted into the early hours of Monday morning, largely in areas of traditional opposition support such as Kadıköy and Besiktas.

Imamoglu merchandise was on sale seemingly everywhere and elated voters danced in the streets ignoring traffic lights, to the concern of local police.

Ozlem Maden, 30, sported an Imamoglu headband and said she was celebrating a win for Turkish democracy.

“My friends and I are so happy … we are very very happy,” Maden exclaimed.

“It’s not just an Istanbul election for us, it’s the end of the Erdogan situation in fact, with this election … we think it is the beginning of CHP [all over Turkey].”

Ali, 56, who asked for his last name to be withheld, moved to London six months ago, and flew back to Istanbul just to vote in the mayoral rerun election.

“It was very important for me to be here, to prove that Erdogan can’t just take what he wants. He cancelled the first election so we had to make a point that he can’t get his way all the time,” Ali said while waving a Turkish flag.

Voters elected Imamoglu mayor nearly three months ago by a razor-slim margin, before the Supreme Electoral Council bent to lobbying by Erdogan’s ruling party and cancelled the vote.

“I didn’t just vote for CHP, I voted for democracy in Turkey,” Turan said, his voice barely heard above the sounds of celebration.

“Istanbul is the starting point for democracy, and now it will trickle to all of Turkey. The dictator is finished, and democracy wins.”

Cagaptay, director of the think-tank’s Turkish research programme, said the election result marks the decline of Erdogan’s long-held ‘brand,’ which represented Turkey’s dispossessed and those marginalized by the system.

“But of course in the last two decades, Erdogan has become the establishment.

“It’s now Imamoglu’s supporters who look dispossessed and marginalized by the system, and I think that really boosted his margin of victory.”

*Name has been changed for security reasons 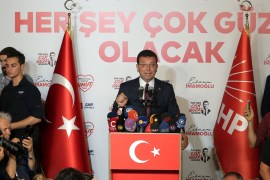 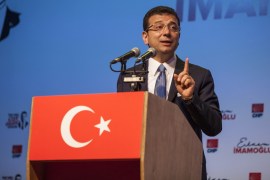 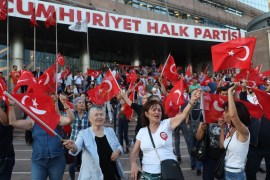 Who will rule Istanbul?

The dominance of Turkey’s AK Party is put to the test in Istanbul’s re-run of its mayoral election.