Thousands of angry Hong Kongers laid siege to the city’s police headquarters on Friday, as two weeks of political unrest continued to roil the territory.

The protesters, the majority of whom wore protective gear in case an uneasy truce with law enforcement collapsed, barricaded all the entrances and exits of the skyscraper.

As the clock approached 11pm (15:00 GMT), there appeared to be little to crack their resolve, as throngs joined the already packed streets and highway flyovers that surround the police building.

The mood was markedly different from last Sunday’s mass march, which organisers say attracted about two million people – almost a quarter of the population of the city.

Friday’s gathering, which did not obtain official protest permits, was an impromptu affair which spread virally on social media accounts across Hong Kong.

The elimination of a controversial extradition bill which, opponents argue, could open Hong Kong residents and visitors to the city to being transported across the border to Mainland China and its opaque, politically motivated justice system, is still a main issue for protesters.

But Friday’s crowd largely turned its anger on the police, who have been accused of using undue force in clashes with protesters just over a week ago.

Calls for that encounter to no longer be called a riot were chanted at the police hunkered down in their headquarters, as protesters refused to budge.

Lawmakers, including the pan-Democrat Claudia Mo, had earlier called for restraint on both sides, particularly after last week’s violence.

Ka Lun To, pan-Democrat councillor, said that the youth who had participated in Friday’s demonstration had “come to the realisation that society cannot be built on material wealth”.

He said that Hong Kong’s Chief Executive Carrie Lam is the perfect pick by Beijing because “she’s very good at carrying out orders but doesn’t know how a society should be built”.

“Across the border they want to control everything, which is exactly what these kids are fighting,” he said.

Charlotte, 19-year-old student who chose not to give her full name, said that Friday’s protest had felt different from the previous two weeks’ actions.

“People are using initiative to gather in different places,” she said, saying that she was surprised by the turnout.

Her companion, Cyrus, also 19 and a student in the UK, said that it was good to keep pressure up by trying different methods of protest.

“We’ve tried being violent, we’ve tried sitting silently, so now we are using our voices.”

People in Hong Kong have marched in their millions this month to oppose a bill they fear will undermine Hong Kong’s judicial independence and tighten China’s grip on the semi-autonomous region.

The movement has expanded into a larger rebuke of Lam, who announced on June 15 she would suspend the bill, but stopped short of withdrawing it completely.

Cheung, 21, a City University student, said there are “numerous issues” that Hong Kongers are mad about.

“The chief executive said that the bill would be delayed. It needs to be scrapped and we are also protesting the violent reaction of the Hong Kong police.”

She said that “both” peaceful protest and more direct action are needed. “I won’t judge anyone who uses violence. They just want to support Hong Kong.”

There is anger at a perceived lack of accountability after police violence was growing.

“In the last few days, police officials have said that they haven’t done anything wrong,” said a 20-year-old student surnamed Kong.

“We no longer have confidence in the police, and we won’t allow the incident to be forgotten.”

Volunteers, some with medical experience, were manning makeshift first-aid tents.

Chan, also a 20-year-old who declined to be identified by anything but her surname, said students were leading the charge in the absence of support by adults.

“They’re not thinking about the future of Hong Kong,” she said.

Since it was returned to China in 1997, Hong Kong has been governed under the so-called “one country, two systems” formula that allows the city’s residents freedoms not enjoyed in mainland China.

But many people in Hong Kong are increasingly fearful of Beijing’s tightening grip over the city and what they see as an erosion of civil liberties.

Opposition to the bill has united pro-democracy and human rights groups with student activists and the traditionally more conservative business and financial communities, amid concern the proposals will expose people to the mainland’s opaque and politicised judicial system and undermine Hong Kong’s status as a global financial centre.

The protests, and the causes behind them, will continue to affect the city financially, according to one banker who declined to be named.

“Obviously [the political situation] is having an effect” on the international business community’s confidence in the city – long vaunted for its adherence to the rule of law and low levels of corruption.

But, he added, “At the same time the protests show the city’s commitment to ‘one country, two systems’, which is reassuring.”

Pro-democracy councillor Claudia Mo told Al Jazeera she doubted the protests would move the needle on Lam’s position on the extradition bill.

“She has offered a de facto withdrawal but she refuses to use that word, which would signal a climbdown. The ‘face’ issue in Chinese politics is ridiculous,” said Mo.

The leader has a moral duty to resign, she said. “It’s political ethics. If you’ve been found to be responsible for the mess, you have to pick up the pieces.” 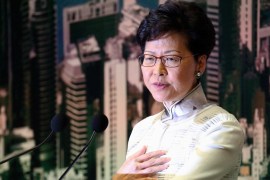