Basra, Iraq – Rocket attacks near the headquarters of foreign oil companies in southern Iraq are a sign of increased regional tensions but will not lead to major disruptions in Iraq’s oil output, analysts and oil industry officials say.

Two rockets struck near the southern city of Basra on Wednesday, including on a compound housing US oil giant ExxonMobil. The attacks wounded at least three Iraqis and prompted ExxonMobil to evacuate its foreign staff from the country.

The departures signalled foreign companies in Iraq are not prepared to take any risks in their operations, despite the period of relative calm the country is experiencing.

The attacks follow a series of similar incidents targeting predominantly military sites across Iraq in recent weeks. Wednesday’s was the first attack to hit buildings used by international oil companies in the country.

An Iraqi employee at an oil company in Basra said the incident was unusual and security was extremely tight on his compound.

“Of course, it has destabilised the mood in the area and could cause disorder, especially as there are lots of foreign companies working here,” he told Al Jazeera via a messaging app, asking to remain anonymous.

“If they leave, it could have a bad knock-on effect on the state of Iraq’s oil.”

Iraqi officials condemned the attack and said production flows and export operations were not affected.

“The ministry has taken necessary measures … to tighten the security of oil installations to prevent the repetition of these cowardly criminal acts and the desperate attempts to damage the oil installations,” an Oil Ministry statement said on Wednesday.

Analysts said they did not expect international oil companies to pull out of Iraq as a result of the attacks.

“I don’t expect any changes in their level of involvement. They have signed up for the long haul and were aware of the risks when they signed up to operate in Iraq,” Ruba Husari, an expert on Iraq’s oil sector, told Al Jazeera.

While the threat of Islamic State of Iraq and the Levant (ISIL or ISIS) attacks has retreated since the group was territorially defeated this year, Iraq remains a theatre for tensions between Iran and the United States, which both have significant interests in the country.

No group has claimed responsibility for any of the recent attacks but experts believe Iran-backed paramilitary groups are most likely responsible.

Tensions in the region continue to rise. On Thursday, Iran’s Islamic Revolutionary Guard Corps shot down a US drone, saying it was a “clear message” to the US.

As accusations between the US and Iran fly, a US official warned there would be a response to “direct” attacks by Iran on US forces, interests or citizens.

Analysts say the Basra attacks have more to do with sending a warning signal to Western powers than with causing damage.

These attacks are carefully calibrated not to inflict casualties to not elicit a response while delivering the message.

“It’s obvious that the attacks are meant to send a message that Western interests in Iraq are within reach if the tension between the US and Iran escalates,” said Husari. “They are not meant to cause damage to the foreign companies operating in southern Iraq.”

In the souks in Basra’s al-Ashar district, between shops selling Iranian powdered soup and loofahs, Basrawis were divided over the effects the attacks might have on them.

“It’s a sign there’s no safety,” said the owner of a perfume shop, who asked to remain anonymous. “The effect on us is fear and worry. If [oil] companies leave, that will take away jobs.”

A man walking in the market as it shut for the night also chimed in.

“Well, it was far away from the city – safety has become excellent in Basra,” he said, also asking his name not be used.

Locals were not eager to assign blame for the attacks, but amid improved safety in the city in recent months, they still sensed tensions were on the rise.

“There is instability, something shaky in Basra, it’s not 100 percent safe,” said a 21-year-old medical equipment salesman, between boxes of dried limes and stuffed animals. 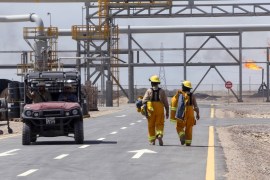 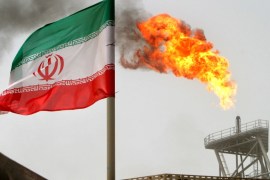 What’s behind US pressure on Iraq to become energy independent?

US push for Iraq’s ‘energy independence’ aims to isolate Iran and take advantage of oil and gas reserves, analysts say. 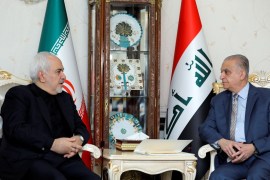 Could Iraq be pulled into a conflict between the US and Iran?

Iraqi leaders are finding themselves caught in the middle as the US ramps up its rhetoric against Iran.