US President Donald Trump formally launched his 2020 re-election campaign on Tuesday in front of a large crowd in Orlando, Florida.

“We are going to keep making America great again and then we will indeed keep America great,” Trump said as he attacked his opponents and the media.

“We are going to keep it better than ever before and that is why I stand before you tonight to officially launch my campaign for a second term as president of the United States,” Trump told the crowd at an arena in Orlando.

The announcement comes amid calls for impeachment, continuing congressional probes into his presidency and administration and deepening divisions over his hardline immigration policies. But Trump’s speech also comes as the economy continues to grow and the Republican president maintains deep support among his base.

Although Tuesday’s speech is being billed as the official beginning of Trump’s 2020 bid, the businessman-turned-politician filed the paperwork officially announcing his bid within hours of his inauguration on January 20, 2017. He has since held campaign-style rallies throughout the United States.

On Tuesday, Trump’s attacks against socialism and his doubling down on conservative stances on nationalism, abortion, family, the judiciary and guns were positively received by the loyalist crowd, who often erupted in “USA” and “Make America Great” chants throughout the event. 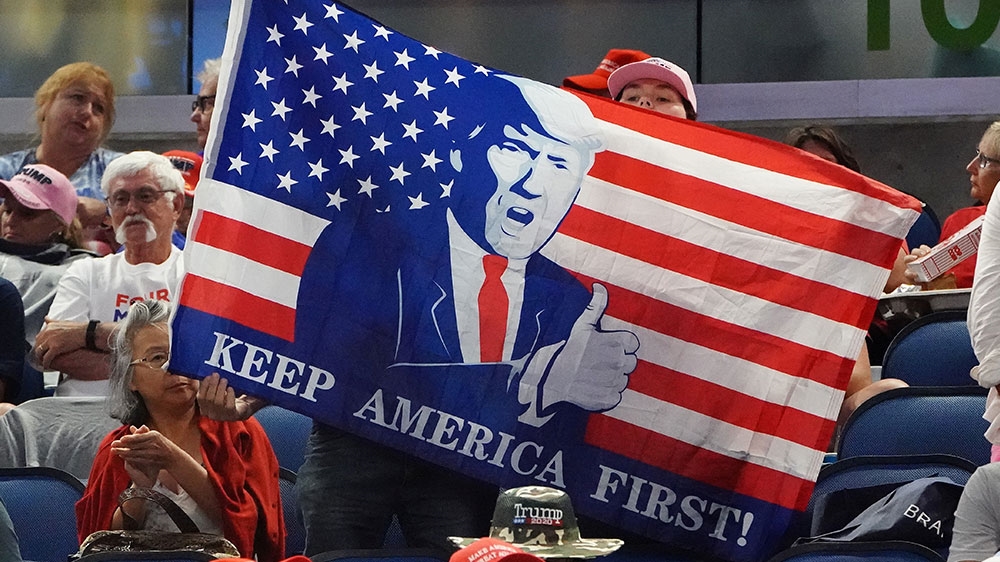 People sit in the stands with a flag before a rally for US President Donald Trump at the Amway Center in Orlando, Florida,[Carlo Allegri/Reuters]

Two-and-a-half years into his tenure, Trump sees plenty of positive factors, led by a growing economy with low unemployment.

“If the economy stays strong, he is very likely to get re-elected,” said Trump confidant Newt Gingrich, a former Republican speaker of the US House of Representatives.

The US president also received a large round of applause when he brought his tax cuts, saying, “we’ve done so much … with the biggest tax cut in history.”

But according to an Associated Press fact check, Trump’s tax cuts are nowhere close to the biggest in US history.

It’s a $1.5 trillion tax cut over 10 years. As a share of the total economy, a tax cut of that size ranks 12th, according to the Committee for a Responsible Federal Budget. Former President Ronald Reagan’s 1981 cut is the biggest, followed by the 1945 rollback of taxes that financed World War II.

Peek into this campaign

Despite the packed crowd at the Orlando arena on Tuesday, Special Counsel Robert Mueller’s investigation of Russian interference in the 2016 election, coupled with a presidential style marked by name-calling and eye-popping tweets, has undermined some Americans’ confidence in Trump before the November 2020 election.

Trump also has stirred division with his hardline policies on immigration and unsettled business and farm groups with his use of tariffs in trade disputes with China and some allies.

As he left the White House on Tuesday for Florida, Trump said that a mass roundup of undocumented immigrants would start next week. He did not elaborate, and rights groups and Democrats have accused the president of sowing fear in the run-up to his re-election launch.

Speaker of the House of Representatives Nancy Pelosi, the top Democratic elected official, said in a statement on Tuesday, “the President’s new threat of a mass deportation dragnet is an act of utter malice and bigotry, designed solely to inject fear in our communities.”

Analysts say Trump’s rhetoric just before Tuesday’s rally seemed to offer a peek into a campaign that will largely be fought along the same lines as his first bid, with very few new policy proposals for a second term.

During Tuesday’s rally, Trump continued to rail against irregular immigration, repeatedly returning to the topic throughout his speech, including throwing out claims about undocumented immigrants without providing evidence.

Those involved in the president’s re-election effort believe Trump’s mantra to “Drain the Swamp”, still resonates, despite his administration’s cosy ties with lobbyists and corporations and the Trump family’s apparent efforts to profit off the presidency.

“He’s still not viewed as a politician,” said Jason Miller, Trump’s 2016 senior communications adviser. “Voters don’t define him by the party label, they define him by his policies and his message of shaking up the status quo in Washington. That’s the biggest reason he was able to win blue states in 2016.”

But Democrats cite a string of broken promises in Trump’s first term, from lowering medicine prices to closing corporate tax loopholes and stopping plant closures, as well as his crackdowns on women’s rights and immigrants.

In a media call on Tuesday, Democratic Party officials focused on his moves to weaken the signature healthcare law of his Democratic predecessor, Barack Obama, without providing an alternative.

“The thing that is working to our advantage is that this president now has a record to run on,” said Democratic National Committee Chairman Tom Perez.

Unlike in 2016, Trump must now defend his presidential record, which includes a number of controversial policies, from his trade war with China to his handling of the US relationship with Saudi Arabia following the murder of Saudi journalist Jamal Khashoggi and the mounting death toll in the Saudi-UAE war in Yemen.

There have also been increased calls from some Democrats, who control the House of Representatives, to begin impeachment proceedings over potential obstruction of justice during Mueller’s investigation into Russian interference in the 2016 election.

Trump, who has repeatedly called the investigation a witch-hunt, again accused Democrats of wanting a “re-do” because they didn’t like the results of the probe.

In parts of an ABC interview published last week, Trump said he would see nothing wrong in accepting damaging information on a political opponent in the coming 2020 presidential elections if it were offered by a foreign government.

He later attempted walked back on those comments a bit, saying “of course” he’d look at damaging information offered, but he would alert the FBI if the information was “bad”.

So far, Democratic leadership has urged caution over impeachment talk, instead, focusing on a myriad of congressional probes into the president, his administration and his businesses.

But Trump is eager to use the power of his office to further his case for re-election. Last month in Louisiana, he promised voters a new bridge if he won, and in the pivotal Florida Panhandle, he pledged new disaster relief money would flow in a second Trump term.

Trump advisers also point to his popularity among white working-class voters, who consider themselves “forgotten Americans” left behind and mocked by elite insiders. For those voters, many of whom in 2016 cast their first ballots in decades, Trump remains the embodiment of their outsider grievances, their anger stoked by his clashes with political foes and the rest of government – even when his party controls it.

Advisers believe that, in an age of extreme polarisation, many Trump backers view their support for the president as part of their identity, one not easily shaken. They point to his seemingly unmovable support with his base supporters as evidence that, despite more than two years in office, he is still viewed the same way he was as a candidate in 2016. 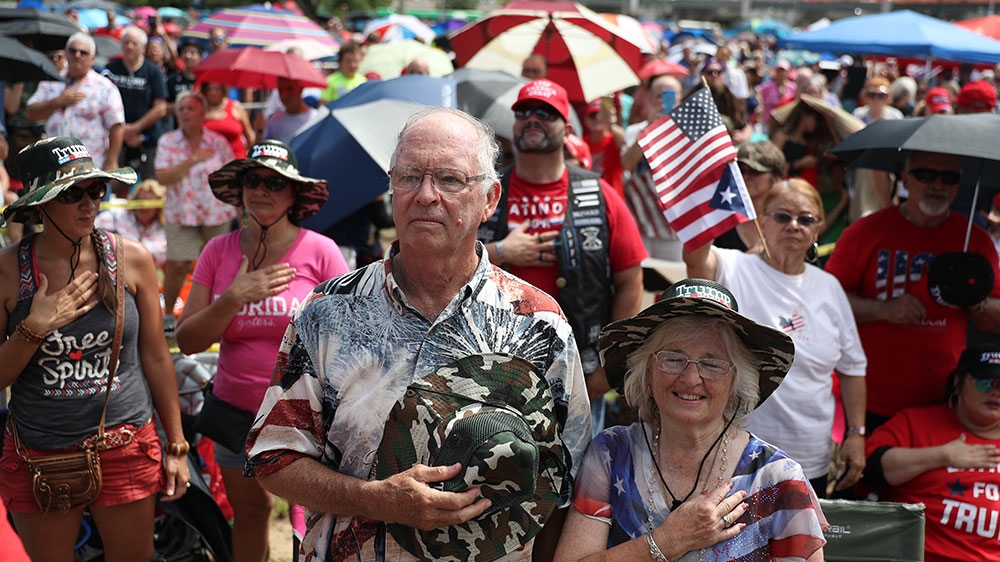 In Florida on Tuesday, Trump supporters began lining up for the president’s rally a full day in advance, local media reported.

“It was like a big Trump party,” Maureen Bailey, who slept in a tent with her twin sister, told Reuters news agency.

Trump will so far face one Republican challenger, former Massachusetts governor Bill Weld, who has little name-recognition among Americans.

Rival Democrats have more than 20 presidential contenders vying for the nomination.

A Quinnipiac University poll, released on Tuesday, showed Trump trailing the early Democratic frontrunner, former Vice President Joe Biden, by nine percentage points in Florida, which has been a key state for presidential candidates for decades.

Senator Bernie Sanders and Senator Elizabeth Warren, the more progressive candidates, are also ahead of Trump in Florida.

Trump has blasted the poll numbers, pointing to his 2016 election victory, which was not predicted by the majority of polling data. 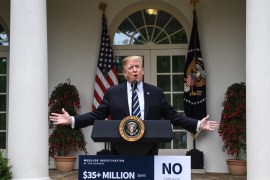 Trump: Will take damaging info on 2020 rivals from foreign agents

US president says he would be willing to accept dirt from a foreign country on presidential opponents in the 2020 race. 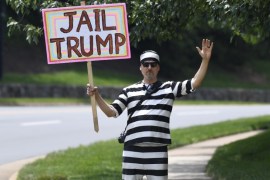 Will Trump go to jail?

Even if a Democrat wins in 2020, Trump will still walk free.