Four suspects are to face murder charges for the shooting down of Malaysia Airlines flight 17 in July 2014, after online investigators published a new report detailing the attack on the passenger airliner which killed 298 people.

Igor Girkin, Sergey Dubinsky, Oleg Pulatov and Leonid Kharchenko were officially named by Dutch prosecutors on Wednesday morning. Three of them are members of the Russian armed forces who are alleged to have helped a separatist movement in Ukraine to obtain, use and remove a sophisticated anti-aircraft missile system.

All four are likely to be tried in absentia when the case is scheduled to be heard in March 2020 in the Netherlands, where most of the victims came from.

“They have all been involved with the transport of the Buk missile which downed the MH17 plane, according to investigators,” said Al Jazeera’s Step Vaessen, reporting from Moscow. “They were very much at the top of the separatist organisation behind the attack.”

Silene Fredriksz-Hoogzand, whose son Bryce was among the dead, expressed relief that five years after the plane was blown out of the sky above conflict-torn eastern Ukraine, a trial could finally start.

“This is what we hoped for,” Fredriksz-Hoogzand told reporters. “This is a start of it. It is a good start.”

Ukraine’s deputy foreign minister Olena Zerkal told Interfax Ukraine on Tuesday that the four were “only the top”.

“Naturally, then, the number of people who are involved in this will be much larger than the four people who will be named,” said Zerkal.

Those four are not expected to face the charges in person.

“Of course, for justice, we would like to see the guilty tried and punished in an international court,” Scott Lucas, a professor of international politics at Birmingham University, told Al Jazeera.

But if the suspects are unlikely to see the inside of a court room, why proceed with the trial?

“It is still essential to complete investigations and issue findings,” Lucas added.

In the aftermath of the 2014 Ukrainian revolution, the Russian military annexed Crimea in eastern Ukraine. Protests in the Donetsk and Luhansk regions blew up into a full-scale armed pro-Russian insurgency, and Ukraine deployed its armed forces to suppress the separatists.

The violence escalated, and Ukrainian air force jets were deployed, with several shot down over the rebel-held territory.

After the disappearance of MH17, a social media account linked to Girkin claimed responsibility for shooting down a Ukrainian military aircraft in the area. A video published by News Corp Australia a year later showed Russian-backed rebels arriving on the scene to discover it was a Boeing 777 civilian flight, packed with hundreds of tourists on their way from Amsterdam to Kuala Lumpur.

“Prosecutors will today send their indictments to the Russian Federation, so the government can notify the suspects of the charges against them,” said Al Jazeera’s Step Vaessen.

“They will not be formally requesting extradition, as according to both the Ukrainian and Russian constitutions, it’s not allowed to extradite any people.

“Police will keep investigating all of these details and the witness accounts they have been receiving, and hope to receive many more.”

Igor Girkin, Sergey Dubinsky, Oleg Pulatov and Leonid Kharchenko were the top four figures identified by Bellingcat, an open-source investigative network, as being behind the attack. Bellingcat analysed more than 150,000 bugged phone conversations which were released by the Dutch-led Joint Investigation Team (JIT) and the Ukrainian Security Service.

Their journalists also used geolocation techniques to study photos and video footage of the missile launcher which were posted online as it was transported across the country.

Girkin, also known as Igor Streikov, who went by the code-name “Strelok” in the intercepted phone calls, is a former colonel in the FSB, the successor agency to the KGB. In 2014, Bellingcat reports, he was the “minister of defence” for the Donetsk People’s Republic (DNR) – a Russian-funded militant separatist group which has been dubbed a terrorist organisation by Ukraine.

The DNR’s military intelligence organisation was headed by Dubinsky (call sign “Khmury”), who Ukraine maintains is also a member of Russia’s military intelligence agency. The intercepted phone calls point to him first requesting the Buk missile launcher, Bellingcat reports, adding that a group under his direct command which played a key role in the decision to shoot down the passenger jet, thinking it was an enemy aircraft.

Pulatov, a former lieutenant colonel in the Russian military, was Dubinsky’s number two at the time of MH17’s downing and was likely involved in securing the missile launcher. He was the man behind the call sign “Gyurza” on the intercepted phone calls, Bellingcat reports.

Kharchenko, identified on the phone calls as “Krot”, is the only Ukrainian of the four. He was head of the DNR’s Krot Reconnaissance Battalion and is alleged to have coordinated the transport of the missile launcher to the launch site, and then, after the destruction of the passenger jet, arranging the removal of the launcher system to Russia.

He is still believed to be in Ukraine, prosecutors in the Netherlands said on Wednesday, as they prepared international arrest warrants for the four. They will be placed on global “wanted” lists before the trial begins in March.

Russia denies any involvement and has suggested the missile may have come from the Ukrainian armed forces. 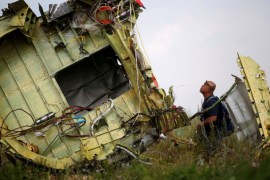 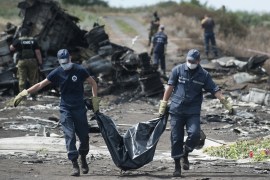 Investigators say they have ‘convincing evidence’ to support their report of the incident that killed 298 people.