Syria does not want to see fighting with Turkey, its foreign minister said on Tuesday, after Ankara said one of its posts in Syria’s Idlib region was attacked from an area controlled by Syrian government forces.

Russia, which supports Syrian President Bashar al-Assad in his country’s civil war, and Turkey, long a backer of the rebels fighting him, co-sponsored a de-escalation pact for the area that has been in place since last year.

But the deal has faltered in recent months, forcing hundreds of thousands of civilians to flee. About 300 people have been killed by Syrian and Russian air raids and shelling in the area since late April, according to the United Nations.

Idlib, in Syria’s northwest along the border with Turkey, is the last remaining bastion of anti-government rebels after eight years of civil war.

“We hope that our military and the Turkish military do not fight. This is our principled stance,” Syrian Foreign Minister Walid al-Moualem told reporters in Beijing, standing alongside the Chinese government’s top diplomat, State Councillor Wang Yi.

“What we are fighting is terrorists, especially in Idlib, which is Syrian territory – part of our country,” al-Moualem said in Arabic comments translated into Mandarin.

The dominant force in the Idlib region is Hay’et Tahrir al-Sham (HTS), a former wing of al-Qaeda until 2016 when it renounced its affiliation. Others, including some with Turkish backing, also have a presence.

“The question now is: what does Turkey want to do in Syria? Turkey is occupying part of Syrian soil, and has a military presence in certain parts of Syria,” al-Moualem added.

“This question needs to be asked of Turkey: What are their actual aims? We are fighting those terrorist groups and organisations. The whole world believes those people we are fighting are terrorists.”

Damascus and Moscow want HTS out of Idlib and disarmed, and keep pressuring Ankara to make that happen.

Since April, Syrian government forces have stepped up their shelling and bombing of the area, killing scores of people.

The rebels say the government’s actions are part of a campaign for an assault that would breach the de-escalation pact.

The government and its Russian allies say the heightened military operations are in response to rebel violations, including the presence of fighters in the de-militarised zone.

China has long urged that a diplomatic resolution to the eight-year Syrian civil war be found and has hosted Syrian government and opposition figures.

Wang said China will continue to support Syria in safeguarding its sovereignty and territorial integrity and fight against “terrorism”, and will help with Syria’s economic reconstruction efforts.

The war in Syria has killed hundreds of thousands of people since it started in 2011, with millions more displaced. 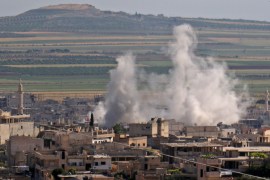 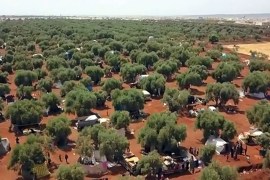 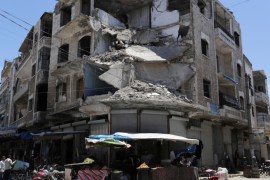 His statement on Twitter comes as Israel launches more air raids against Syria, according to Syrian state media.