The United States will maintain its pressure campaign on Iran and continue to deter aggression in the Gulf region but does not want the conflict with Tehran to escalate, Secretary of State Mike Pompeo said on Tuesday.

“We have been engaged in many messages, even this moment right here, communicating to Iran that we are there to deter aggression,” Pompeo told reporters at MacDill Air Force Base in Florida.

He travelled to the base after the Pentagon announced the deployment of an additional 1,000 US troops to the region.

Pompeo said he made the trip to visit commanders in Florida to ensure that Washington’s diplomatic and military efforts were coordinated.

“President [Donald] Trump does not want war and we will continue to communicate that message while doing the things that are necessary to protect American interests in the region,” he said. Both the US and Iran have previously said they do not seek war with each other.

“Now we need to make sure that we continue to do that so that we ultimately we get the opportunity to convince Iran that it’s not in their best interest to behave in this way,” Pompeo added.

He said the Trump administration would “do the right thing” as it relates to Iran, which is to make clear that the US is serious.

“We all have to remember this isn’t just two and a half years or five years this is 40 years of Iranian activity that has led us to this point,” Pompeo said.

Fears of a confrontation between Iran and the US have grown since Washington blamed longtime foe Iran for last week’s attacks on two oil tankers near the strategic Strait of Hormuz shipping lane.

Washington blamed Tehran for a similar attack on May 12 off the coast of the United Arab Emirates (UAE).

Iran has vehemently denied any involvement, hinting that the US may have carried out the latest suspected attack in order to apply extra pressure on Tehran on top of the crippling sanctions it reimposed over the past year.

In an interview with Time magazine released on Tuesday, Trump said he was prepared to take military action to stop Tehran from having a nuclear bomb, but left open whether he would sanction the use of force to protect Gulf oil supplies.

He said the suspected attacks on tankers so far had “been very minor”.

Pompeo called on “every nation” to do its part to protect the shipping lanes in the Strait of Hormuz.

“The United States is prepared to do its part, but every nation that has a deep interest in protecting that shipping lane so that energy can move around the world and support their economies,” he said.

Meanwhile, on Tuesday, Trump announced that acting Defense Secretary Patrick Shanahan had withdrawn from consideration to head the US military.

The US has said the secretary of the Army, Mark Esper, will be named as the new acting defence secretary. 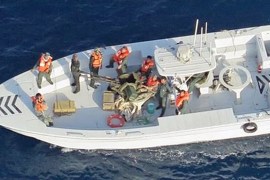 US releases new images from suspected attacks on Gulf tankers 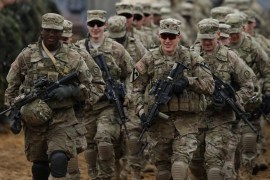