Wong, 22, was released on Monday from the Lai Chi Kok correctional facility after completing a two-month sentence for his part in the so-called Umbrella Movement that brought the city to a standstill for more than two months in late 2014.

The move comes as a political crisis in the Chinese-ruled city enters its second week amid growing uncertainty over the fate of Lam and the extradition bill, which she suspended “indefinitely” on Saturday.

Before being jailed, Wong had called for the Hong Kong government to scrap the legislation, under which it would be allowed to extradite people to any jurisdiction in the world with which it currently has no existing formal agreement – including mainland China.

“Withdraw the extradition bill,” Wong said in a tweet after his release. “Carrie Lam step down,” he added.

Wong’s release came after some two million people took to the streets of the semi-autonomous territory on Sunday, according to protest organisers, to demand the bill’s full withdrawal and express their anger at the way police handled an earlier demonstration against it on Wednesday.

The turnout has not been independently verified but, if confirmed, it would mark the largest demonstration in the history of Hong Kong, which is home to about seven million people. Police said the rally drew 338,000 participants at its peak.

The mass rally prompted Lam to apologise late on Sunday over her prior plans to push through the legislation, which she had previously defended as necessary to ensure Hong Kong meets its “international obligations in terms of cross-boundary and transnational crimes”.

“The Chief Executive admitted that the deficiencies in the Government’s work had led to substantial controversies and disputes in society, causing disappointment and grief among the people,” a statement by Lam’s office said, adding there was “no timetable for restarting the process” over the extradition bill.

“The Chief Executive apologised to the people of Hong Kong for this and pledged to adopt a most sincere and humble attitude to accept criticisms and make improvements in serving the public.”

The apology failed to placate protesters or opposition politicians, however, who called for both Lam and the law to go.

“Her government cannot be an effective government, and will have much, much, much difficulties to carry on,” veteran Democratic Party legislator James To told government-funded broadcaster RTHK.

“I believe the central people’s government will accept her resignation,” he added.

“Wong has called on these protesters to remain strong and committed to the cause … [he] will join them at the government headquarters later,” Clarke said.

“As for what’s happening inside government headquarters, there’s nothing happening, it’s been closed,” she added.

The Legislative Council delayed a second reading of the extradition bill scheduled to take place last Wednesday after tens of thousands of protesters took to the streets to call for it to be scrapped. Riot police responded with tear gas, water cannon and pepper spray against those demonstrating, in some of the worst violence the territory has seen since reunification with China.

Protesters want authorities to apologise for the show of force by the police, and have also called on the government not to prosecute those involved as well as withdraw Lam’s designation of the rally as a “riot”.

Despite the rising pressure on Lam’s administration, Beijing has continued to back the embattled Hong Kong leader over the bill.

The official China Daily newspaper said in an editorial on Sunday that ruling Communist Party authorities’ support for Lam would “not waver … in the face of street violence nor the ill-intentioned interventions of foreign governments”.

“Despite those who hold up the proposed bill as a sign that the principle of ‘one country, two systems’ is being eroded, the opposite is true,” the editorial added.

“Such claims come from a lack of understanding, or willful ignoring of the mainland’s justice system and its improvements over the years.”

US and European officials have issued formal warnings over the proposed changes, however, matching international business and human rights groups who fear the amendments will dent Hong Kong’s judicial independence and rule of law. 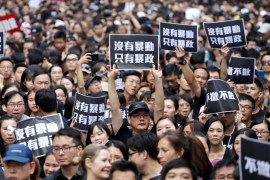 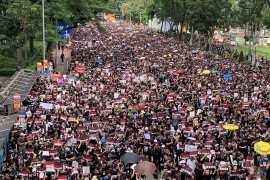 Hundreds of thousands fill streets in march against extradition bill and call for it and chief executive to go.