Saudi Arabia has urged a rapid response to secure energy supplies in the Gulf region after the attack on two tankers in a critical oil shipping route caused tensions to soar.

The United States has blamed Iran for the attacks, but Tehran has denied any role in the incidents and called the accusations “ridiculous” and “dangerous”.

Saudi Energy Minister Khalid al-Falih said on Saturday “there must be a rapid and decisive response to the threat” to energy supplies, market stability and consumer confidence after the attacks in the Gulf area, his ministry posted on Twitter.

“The international community must cooperate to secure international navigation and access to energy,” Minister of Foreign Affairs Sheikh Abdullah bin Zayed Al Nahyan said at a summit in Bulgaria.

On Friday, the US released a grainy video it claimed showed Iran’s military removing an unexploded mine from one of the tankers, Kokuka Courageous, hours after the suspected attacks.

Iran said the video proved nothing and that Tehran was being made a scapegoat. 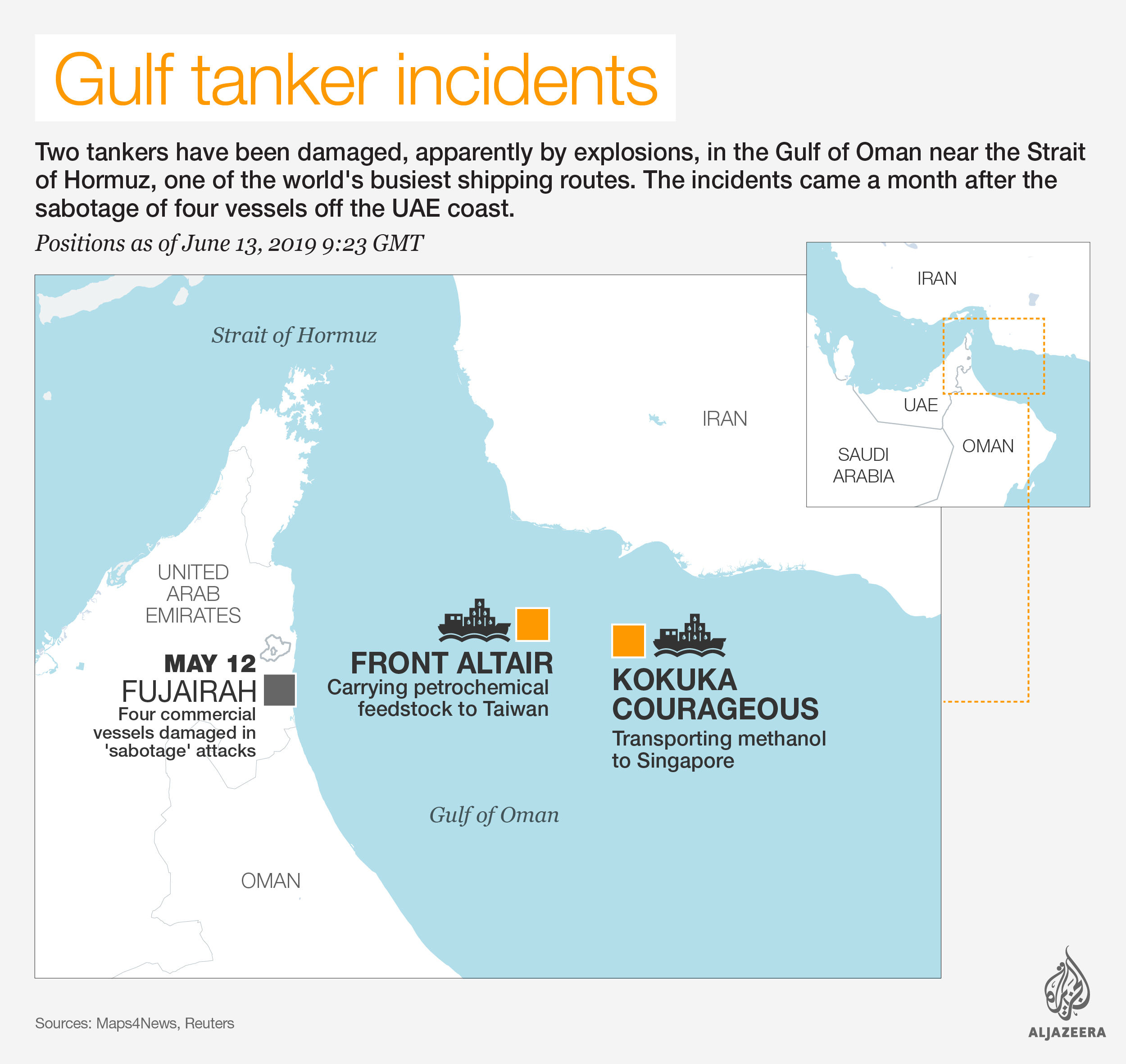 On Friday, in a TV interview on Fox News, President Donald Trump said, “Iran did do it”.

“You know they did it because you saw the boat,” Trump told the Fox and Friends show. “I guess one of the mines didn’t explode and it’s probably got essentially Iran written all over it.”

But Yutaka Katada, the owner of the Kokuka Courageous, cast doubt on part of the US account, telling reporters on Friday that the vessel’s crew saw a “flying object” before a second blast on the boat.

The allegation “only makes it abundantly clear” that the US and its regional allies, Saudi Arabia and the UAE, were moving to a “Plan B”, Zarif said, which was to “sabotage diplomacy” as Japanese Prime Minister Shinzo Abe visited Iran to defuse escalating US-Iran frictions.

The director general of ports and maritime affairs of Iran’s Hormozgan province told Iran’s student-run ISNA news agency on Saturday that no marine pollution was detected after the tanker explosions.

The 23 seamen of the second tanker, Front Altair, who were rescued and taken to Bandar Abbas, arrived in Dubai on Saturday, according to the ship’s owners and managers.

The other tanker, Kokuka Courageous, with 21 crew on board, arrived on Friday at the port of Khor Fakkan in the UAE, ISNA reported.

On Friday, the head of the Arab League called on the Iranians to “be careful and reverse course”.

“We believe that responsibilities need to be clearly defined,” he said. “The facts will be revealed, I am sure, it’s only a matter of time.”

Aboul Gheit added, “My call to my Iranian – and I call them Iranian brothers: be careful and reverse course because you’re pushing everybody towards a confrontation that no one would be safe if it happens.”

The British government said it agreed with the US conclusion that Iran attacked the tankers.

The Foreign Office said in a statement that its own assessment concluded “it is almost certain that a branch of the Iranian military”, implying the Islamic Revolutionary Guard Corps, had attacked the tankers.

It said it also believed Iran was behind an attack last month on four tankers near the UAE port of Fujairah.

On May 12, days after Washington announced the military deployment, four oil tankers near the port were damaged in what the UAE called “sabotage attacks”.

Separately, Iranian President Hassan Rouhani on Saturday told a meeting of Russian, Chinese and other Asian leaders in Tajikistan that Iran will continue scaling back compliance with its commitments under the nuclear deal unless other signatories show “positive signals”.

Iran stopped complying in May with some commitments in a 2015 nuclear deal that was agreed with global powers, a year after the US unilaterally withdrew from the accord and tightened sanctions.

Tehran said in May that Iran would start enriching uranium at a higher level unless world powers protected its economy from US sanctions within 60 days.

“Obviously, Iran cannot stick to this agreement unilaterally,” Rouhani told the Conference on Interaction and Confidence Building Measures in Asia.

“It is necessary that all the sides of this agreement contribute to restoring it,” he said, adding that Iran needed to see “positive signals” from other signatories to the pact, which include Russia, China, Britain, France and Germany.

He did not give details on what actions Iran would take or say what positive signals Tehran wanted to see.

France and other European signatories to the deal, which aimed to curb Iran’s nuclear ambitions, have said they wanted to save it, but many of their companies have cancelled deals with Tehran under financial pressure from the US.