Hong Kong‘s pro-Beijing leader said on Monday she had no plans to withdraw a controversial plan to allow extraditions to the Chinese mainland, a day after an estimated one million people marched to oppose the proposal.

“This is a very important piece of legislation that will help to uphold justice and also ensure that Hong Kong will fulfil her international obligations in terms of cross-boundary and transnational crimes,” Chief Executive Carrie Lam told reporters.

Al Jazeera’s Adrian Brown, reporting from Beijing, said: “In the face of the protests, in the face of all her critics, Carrie Lam remains undeterred”.

“It’s pretty clear she is not going to shelve this controversial bill that has caused so much alarm and agitation in Hong Kong.

“She says the bill is necessary and sensible and that is also the view of the government here in Beijing,” Brown said.

Riot police surrounded Hong Kong’s parliament on Monday after a mass rally descended into violence as several hundred protesters clashed with police, who responded with pepper spray before the standoff ended.

The protests plunged Hong Kong into a new political crisis, heaping pressure on Lam’s administration and her official backers in Beijing. Veteran legislators have called on her to resign.

The semi-autonomous city’s government is pushing a bill through the legislature that would allow extraditions to any jurisdiction with which it does not already have a treaty – including mainland China.

The proposals have sparked an outcry and birthed an opposition that unites a wide cross-section of the city, with opponents fearing the law would entangle people in China’s opaque and politicised court system.

Protesters believe the proposed law would damage the city’s rule of law and put many at risk of extradition to China for political crimes.

Sunday saw huge crowds march in blazing summer heat through the cramped streets of the financial hub’s main island in a noisy, colourful demonstration calling on the government to scrap its planned extradition law.

Police estimated the crowd at 240,000, but organisers said more than one million took part in what appeared to be the biggest protest since 2003 – presenting Lam with a major political crisis.

But in her first comments since the mass rallies, Lam said she had no plans to change the current law’s wording or withdraw it from the city’s legislature.

“The bill will resume its second reading on the 12th June,” she said.

Lam denied ignoring the huge public backlash and said her administration had already made major concessions to ensure the city’s unique freedoms would be protected and that the bill’s human rights safeguards met international standards.

“I and my team have not ignored any views expressed on this very important piece of legislation. We have been listening and listening very attentively,” she said.

But Al Jazeera’s Brown said that many people are not convinced by Lam’s arguments that there are sufficient safeguards in the new bill to address their concerns.

US and European officials have issued formal warnings, matching international business and human rights lobbies that fear the changes would dent Hong Kong’s rule of law.

The former British colony was handed back to Chinese rule in 1997 amid guarantees of autonomy and various freedoms, including a separate legal system, which many diplomats and business leaders believe is the city’s strongest remaining asset.

All but one protester had been cleared from the area, with residents back to work as normal.

Hong Kong newspaper Mingpao said in an editorial the government should take the protesters seriously and that pushing the legislation forward would exacerbate tensions.

The official China Daily newspaper said in an editorial on Monday that “foreign forces” were trying to hurt China by creating chaos in Hong Kong.

“Any fair-minded person would deem the amendment bill a legitimate, sensible and reasonable piece of legislation that would strengthen Hong Kong’s rule of law and deliver justice,” the mainland paper said.

Amnesty International said the amended extradition law was a threat to human rights.

“If enacted, this law would extend the ability of the mainland authorities to target critics, human rights activists, journalists, NGO workers and anyone else in Hong Kong, much in the same way they do at home,” it said in a statement. 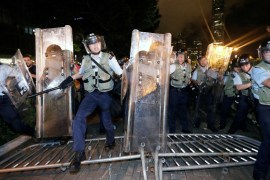 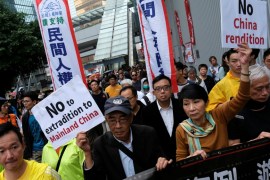 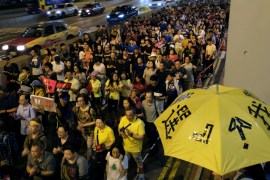