Israeli warplanes and gunboats continued to target the Gaza Strip on Sunday, as rockets were also fired from Gaza into southern Israel.

The latest violence comes a day after at least six Palestinians, including a pregnant mother and her one-year-old baby, and one Israeli, were killed in tit-for-tat strikes and rocket attacks.

Al Jazeera’s Harry Fawcett, reporting from the Israeli side of the border with Gaza, said the escalation was “far from over”.

“This is potentially a dangerous and long, major military escalation,” he said. “The Israeli media is quoting senior defence sources as saying they expect this fighting to last some days.”

Speaking at the weekly Israeli cabinet meeting, Prime Minister Benjamin Netanyahu vowed to strengthen military forces along the Israeli border and to keep up “massive strikes” in response to the rockets.

“I have given the order for the air force and the artillery to continue bombing Gaza,” he said. “We will continue to work to restore security to the people living in the south.”

“Hamas is responsible not only for its attacks against Israel, but also for the Islamic Jihad’s attacks, and it is paying a very heavy price for it,” he added.

Israeli media reported Gaza fighters over the past two days fired more than 400 rockets at towns and cities in southern Israel and that the Israeli Iron Dome anti-missile system had intercepted more than 250 of them.

The government media office in Gaza said Israeli warplanes carried out about 150 raids, in addition to artillery-shelling targeting 200 civilian landmarks in the Gaza Strip, including residential buildings, mosques, shops and media institutions.

About 40 Palestinians were wounded in the attacks, according to Gaza’s health ministry.

One of the buildings destroyed had housed the Gaza bureau of the Turkish state-run Anadolu news agency.

“We call on the international community to act swiftly in order to ease tensions that have increased due to Israel’s disproportionate actions in the region,” a Turkish foreign ministry statement said.

On Sunday, the Israeli army denied that Falastine Abu Arar, the 37-year-old pregnant mother, and her infant daughter Siba, were killed by Israeli forces, instead blaming a misfiring of a Palestinian rocket.

A 58-year-old Israeli man was killed by a rocket strike on the city of Ashkelon, according to Israeli police.

The United Nations Special Coordinator for the Middle East Peace Process Nickolay Mladenov called on all parties to “immediately de-escalate and return to the understandings of the past few months”.

“I am deeply concerned by yet another dangerous escalation in Gaza and the tragic loss of life,” he said.

“My thoughts and prayers go out to the family and friends of all those who were killed, and I wish a speedy recovery to the injured.”

The latest flare-up came after four other Palestinians were killed in two separate incidents on Friday.

Two were shot dead during the weekly Great March of Return protests near the Israeli fence east of Gaza, while an air raid targeting a Hamas outpost killed two members of the movement’s armed wing.

The Israeli army said the air raid was in response to a shooting that wounded two of its soldiers near the fence.

An Israeli drone attack near a vehicle, which injured three Palestinians, preceded the barrage of rockets fired, our correspondent said.

Armed factions in Gaza, who are otherwise known as the Joint Operations Room and include the military wing of Hamas and the Islamic Jihad, vowed on Saturday to “extend its response” if the Israeli army continued to target the strip.

In a statement on Saturday, the Joint Operations Room said: “Our response will be broader and more painful in the event [Israel’s] extends in aggression, and we will remain the protective shield of our people and our land.”

Israel and Egypt have maintained a crippling blockade on Gaza since Hamas seized control of the territory in 2007.

But Israel scaled back the fishing zone this week in response to rocket fire and shut the border crossings entirely on Saturday after barrages from the enclave.

Israel is due to celebrate its independence day this month, and will also host the Eurovision song contest in Tel Aviv.

This marks a “politically sensitive time in Israel”, Harry Fawcett said, adding that there has been speculation both within and outside of Gaza that Hamas and Islamic Jihad have timed the launching of rockets to express their frustrations over Israel failing to uphold its end of agreements.

“Other reported terms within that framework, including increasing the amount of Qatari funding coming into Gaza, have not happened,” he said.

“Various reported understandings about easing economic restrictions, creating jobs, looking to improving electricity flow in Gaza– there’s been nothing on those lines.”

About two million Palestinians live in Gaza, whose economy has suffered from years of a blockade as well as recent foreign aid cuts. Unemployment stands at 52 percent, according to the World Bank, and poverty is rampant. 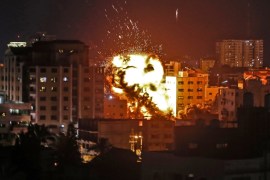 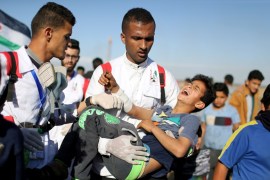 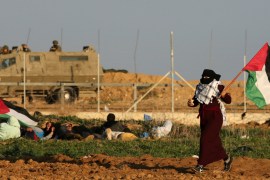