Iran has mobilised all its resources to sell oil in a “grey market”, a top official said, after the United States told buyers of Iranian oil – including China, India and Turkey – to stop purchases or face sanctions.

Amir Hossein Zamaninia, Iran’s deputy oil minister, told state media on Sunday that Iran will continue to export oil despite the US sanctions, which he said were neither just nor legitimate.

The US moves, announced in April, are part of a “maximum pressure campaign” aimed at halting Iran’s ballistic missile programme and curbing its regional power, including its support for conflicts in Syria and Yemen.

They come after Washington withdrew last year from a landmark nuclear pact – in which Tehran agreed to curb its nuclear programme – and reimposed sanctions on exports of Iranian oil in November.

At the time, eight of Iran’s largest oil importers were granted waivers from US sanctions to allow them time to find alternative supplies. Several countries expected those exemptions to be renewed, but the White House in a surprise move decided not to do so.

The decision is aimed at cutting Iran’s oil exports to zero and depriving the government of its lifeline of $50bn in annual oil revenues.

“We have mobilised all of the country’s resources and are selling oil in the ‘grey market’,” state news agency IRNA quoted Zamaninia as saying.

“We certainly won’t sell 2.5 million barrels per day as under the [nuclear deal],” he said. “We will need to make serious decisions about our financial and economic management, and the government is working on that.”

He gave no details about the “grey market”, but Iran is widely reported to have sold oil at steep discounts and often through private firms during sanctions earlier this decade.

“This is not smuggling. This is countering sanctions which we do not see as just or legitimate,” Zamaninia said.

Manouchehr Takin, a United Kingdom-based oil and energy consultant, said tankers loading Iranian crude could bypass US sanctions by operating under the radar and making it harder to track actual volumes of oil shipments.

“Within the sea trade, there’s hundreds of tankers moving around here and there, and these vessels go to different ports, load and unload and so on. And tankers, when they get out on the open sea, they may switch off some of their signals so they would not be tracked, and then change names or papers.”

“What the US is doing is illegal and to get out of it, Iran wants to do the best it can,” he told Al Jazeera.

On Saturday, the European Union, which has pledged to uphold the 2015 nuclear deal without the US, also voiced concern over the added US sanctions.

In a statement, the EU and the foreign ministers of France, Germany and Britain – the three EU powers that led the initial nuclear negotiations with Iran – said they took note “with regret and concern of the decision by the United States not to extend waivers with regards to trade in oil with Iran”.

Turkey and China are the only two countries so far to have expressed a desire to continue large purchases of Iranian crude. Other major buyers, such as India, Japan and South Korea, have signalled they would bow to US pressure.

On Saturday, Iran’s President Hassan Rouhani said Iran must counter US sanctions by continuing to export its oil as well as boosting non-oil exports.

“America is trying to decrease our foreign reserves … So we have to increase our hard currency income and cut our currency expenditures,” Rouhani said live on television.

“Last year, we had non-oil exports of $43bn. We should increase production and raise our [non-oil] exports and resist America’s plots against the sale of our oil.”

Separately, the US also acted on Friday to force Iran to stop producing low-enriched uranium and expanding its only nuclear power plant.

Highly enriched uranium can be used to fuel a nuclear weapon.

“Under the deal, we have not done anything wrong. We continue enriching,” he was quoted as saying by the semi-official news agency ISNA. 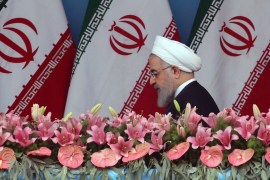 How will Trump’s Iran oil gamble affect the global economy?

We look at US sanctions on Iran and whether there is enough oil from the US, Saudi Arabia and UAE to fill the void. 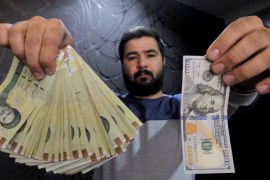 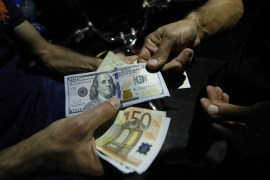