Saudi Arabia’s Foreign Minister Ibrahim al-Assaf has said a solution to the Gulf crisis would only be possible if Doha returns to the “right path”, an indication that the kingdom’s position on the blockade of Qatar has not changed.

Sheikh Abdullah’s presence in Mecca is the first time a high-profile Qatari official has visited Saudi Arabia since it, along with the United Arab Emirates (UAE), Bahrain and Egypt, enforced an economic and diplomatic boycott against Qatar in June 2017 over allegations of supporting “terrorism”, a charge Doha denies.

“Qatar participated in previous summits, so it is not new,” said al-Assaf when asked about Qatar’s presence at the summits.

“The Saudi stance, like the other countries, is that we are looking for a solution for the causes of the problems and the crisis between these countries and Qatar,” he said.

“Hopefully, there will be a solution if Qatar comes back to the right path.”

Among the rare gestures at the Mecca event was Sheikh Abdullah shaking hands with his host, King Salman, after the pair were encouraged by the Kuwaiti Emir Sheikh Sabah Al-Ahmad Al-Sabah.

There was also a quick handshake between the Qatari prime minister and Saudi Crown Prince Mohammed bin Salman, though it wasn’t clear if the two leaders exchanged any words.

Saudi Arabia is hosting emergency meetings of the Gulf Cooperation Council (GCC), the Organisation of the Islamic Cooperation (OIC) and the Arab League to counter what it said was Iran’s growing influence.

“Qatar has always been a strong advocate of peace and it supported solving differences through dialogue and mediation,” said a political analyst as quoted by the newspaper.

“Qatar’s mediation has led to peace in several parts of the world.”

The rights of Saudi Arabia and the UAE to defend their interests after the attacks on oil pumping stations in the kingdom and tankers off the UAE was supported in a Gulf-Arab statement and a separate communique issued later. Tehran denies any involvement in the attacks.

In further signs of regional tensions, Iraq, which has good ties with neighbouring Iran and Washington, said it objected to the Arab communique saying that any cooperation with Tehran should be based on “non-interference in other countries”. 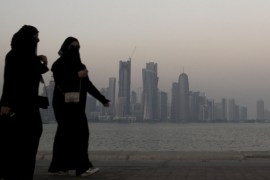 Analysis: Behind the punishing blockade against Qatar

Qatar has embraced a domestic and foreign policy independent of Saudi’s regional hegemony, making it a target. 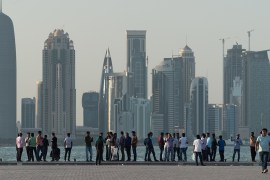