More than 300 tornadoes have ravaged the US Midwest in the last two weeks during an unusual onslaught of extreme weather – the average for the entire month of May is around 280.

This makes it the fourth-worst tornado season on record.

About 20 tornadoes, including a large rain-wrapped twister near Kansas City, were reported to the NWS by storm chasers and spotters.

News broadcasts showed images of roofs torn off houses and roads scattered with debris. The extent of the damage was unclear and there were no reports of fatalities or injuries.

The latest wave of tornadoes came a day after a spate of twisters pulverised buildings in western Ohio, killing one person and injuring many others, triggering a recovery effort in neighbourhoods.

Residents and volunteers worked on Tuesday to clean up debris and repair homes in Celina, Ohio, where a tornado touched down and killed an 81-year-old man.

The storm was among 55 twisters that forecasters said may have touched down across eight states stretching eastward from Idaho and Colorado.

The past couple of weeks have seen unusually high tornado activity in the US, with no immediate end to the pattern in sight. 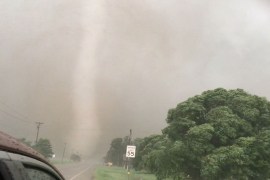 Tornadoes cause extensive damage across US Southern Plains

Twenty tornadoes reported across the Southern Plains but were less destructive than warnings predicted. 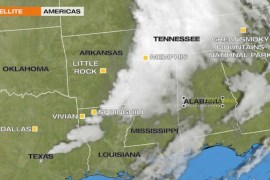 US Southern states hit again by tornadoes – lesser ones

Warnings of severe thunderstorms from northern Texas to Tennessee brought an expectation of tornadoes. 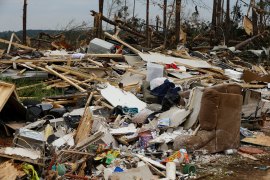 US tornadoes cause deaths and loss, toll likely to rise

Search operation still under way after twin twisters rip through Alabama in southern US on Sunday, killing 23 so far.