Brussels, Belgium – First it was the votes, and now it’s the Game of Thrones.

As the dust settles on the result of last week’s European Parliament elections held across the European Union’s 28 countries last week, alliance-building discussions have begun in Brussels for the appointment of the bloc’s tops jobs.

Leaders of all EU member countries on Tuesday evening took part in an informal dinner behind closed doors to kick-start the process.

One of the first tasks of the new parliament will be appointing a new head of the European Commission, the EU’s executive body that is responsible for proposing new laws and allocating funding.

“There is no automaticity,” Donald Tusk, the head of the European Council, told journalists at a press conference after the meeting, referring to the selection process. “No one can be excluded,” he added.

A majority of the leaders of the eight groups that make up the European Parliament want the Commission chief to be chosen among the lead candidates of each political group whose names were put forward before the elections and who campaigned in that capacity.

Tusk, who will be responsible for consultations with the European Parliament, said the EU leaders also “discussed balances”.

“The need to reflect the diversity of the union when it comes to geography, the size of countries, gender and political affiliation,” he added.

The current head of the European Commission is Luxembourg’s Jean-Claude Juncker of the centre-right European People’s Party (EPP).

The EPP was and remains the largest group in the European Parliament. However, it has lost close to 40 seats in the new legislature, as voters drifted away from mainstream parties to the Liberals, Greens and the far-right making this parliament the most fragmented so far.

Alongside the Progressive Alliance of Socialists and Democrats (S&D) group, which also lost more than 30 seats, the EPP has traditionally dominated European politics. It currently holds all of the EU’s top three  jobs.

“There was usually a clear winner,” Andrea Mammone, a lecturer in modern European history at Royal Holloway, University of London, told Al Jazeera. “There was a coalition between two forces, and that was all. Now the situation has changed, and claiming entitlement to a candidate on grounds of a few extra votes can be more complex.”

Merkel and Macron at odds

The lead candidate for the EPP is Manfred Weber, a German politician whose candidacy caused a rift on Tuesday in Brussels between German Chancellor Angela Merkel and French President Emmanuel Macron, who does not endorse the lead candidate system.

“Naturally, in a great coalition, I support Manfred Weber – but not all coalition partners do the same,” Merkel told reporters as she arrived at the summit.

But Macron was clearly against Merkel’s choice, and he’s gaining support among other leaders.

“The key for me is for the people at the most sensitive positions to share our project and be the most charismatic, creative and competent possible,” the French president told reporters at the end the talks. “It is important for me to have gender balance, that we name two men and two women,” he added.

The liberal ALDE group won the most extra seats (38) in the new parliament by joining forces with Macron’s Renaissance movement. They are the third-largest group in the European Parliament and are largely seen as the kingmakers for any coalition. The Liberals argue that the procedure of choosing the leading candidates would only make sense if elections worked on the basis of transnational lists, which is currently not possible to set up.

Meanwhile, Frans Timmermans, the lead candidate for the Socialists, has insisted that the various groups must first agree on political priorities, “then we can start playing the Game of Thrones on who gets which job”.

Italy’s far-right Interior Minister Matteo Salvini and France’s Marine Le Pen intend to form a new group in the European Parliament, coalescing around the idea of a “Europe of the nations” in which power is taken back from Brussels and devolved back to national governments.

They blame Brussels for allowing refugees into Europe, threatening what they see as the continent’s “Christian” identity – Salvini held a rosary in two recent high-profile public appearances, including a press conference after the election results started to emerge.

Salvini’s The League and Le Pen’s National Rally came first in last week’s elections in their respective countries. While Le Pen narrowly defeated Macron in France, Salvini crushed his ally in the Italian government, the Five Star Movement, as the centre-left Democratic Party (PD) timidly re-emerged as an opposition force.

There are currently eight political groups MEPs can choose to join in the European Parliament. Groups have to notify their composition by July 1.

Salvini has hinted he is looking in the direction of Nigel Farage’s Brexit party, which came first in Britain with more than 30 percent of the vote. Farage’s party currently sits in the Europe of Freedom and Direct Democracy group, which gained 54 seats and contains the Five Star Movement.

A number of smaller far-right parties that have come forward in support of Salvini’s alliance are part of the European Conservatives and Reformists Group, but many have not been doing well and some – such as Geert Wilders’ anti-Islam Party for Freedom in the Netherlands – got no seats at all.

“The League will try and put together a group that will count between 100 and 150 parliamentarians,” Salvini said at a press conference after the vote.

There is also the question of Hungarian Prime Minister Viktor Orban and his Fidesz party, which was suspended from the EPP last March over concerns for the rule of law in Hungary.

Orban has been defending his model of “illiberal democracy”, cracking down on civil society at home and denying food to refugees stuck at the EU’s borders. Just a few days before the elections, he praised Salvini for “manning the front line” in the central Mediterranean, where the Italian interior minister has been waging a war against rescue NGOs.

“In practice, we’ll have to see if [Fidesz] really leaves the EPP, or if the EPP finds the courage for an expulsion,” Mammone, who studies nationalism and the far-right in Europe, told Al Jazeera. “And even in that case, I am not sure Salvini will get the numbers [he claims he will]”. 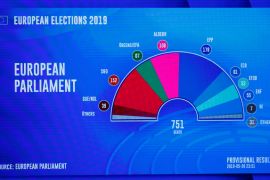 European leaders are deciding who should take on the continent’s most powerful roles as they build new alliances. 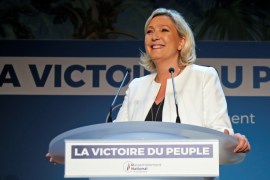 Did Putin win the EU elections?

European populists have proclaimed victory at the EU vote. Should the Kremlin rejoice?