Police are investigating reports that at least one person was killed in the disturbances, but Dedi denied live rounds had been used.

“We are still checking, but I need to reiterate that police officers were not equipped with live bullets,” he told reporters, according to the AFP news agency.

Local media on Wednesday reported six people had been killed, citing Jakarta Governor Anies Baswedan who visited city hospitals in the morning. He said 200 people had been injured. The governor’s office did not answer calls seeking comment from Al Jazeera, nor did the police spokesman.

Earlier, he said that dozens of people had been detained.

Kompas TV, an Indonesian news channel, showed protesters throwing rocks, facing off against hundreds of riot police in a neighbourhood in the centre of the capital.

Prabowo, a retired general who has been accused of human rights abuses, has claimed widespread cheating in the April 17 election but has provided no credible evidence to back up his allegations.

The legal director of his campaign team said on Tuesday that Prabowo would lodge a formal challenge to the result with the Constitutional Court.

Later on Wednesday, Indonesia’s chief security minister said social media would be partially blocked to prevent the spread of hoaxes following the violence in Jakarta.

“To avoid provocations, the spread of fake news through the community, we will limit access to certain features on social media,” said Wiranto, who uses one name.

Several thousand people on Tuesday took to the streets around the office of the General Elections Commission after the agency confirmed Widodo had won a second presidential term with 55.5 percent of the vote, compared with 44.5 percent for Prabowo.

Those protests ended peacefully, but the situation turned ugly when some demonstrators refused to leave the area.

Al Jazeera’s Florence Looi, reporting from Jakarta, said the clashes went on for several hours, but the streets of the capital were largely calm on Wednesday morning.

Protesters were expected to return in the afternoon.

Prabowo has until Friday to lodge his appeal with the Constitutional Court. It then has 14 days from the time it receives all the evidence to make a decision.

“It’s worth remembering that international observers have said the elections were largely free and fair, even though Prabowo alleges widespread cheating,” Looi said.

“Some analysts have even said that because Widodo won by an 11 percentage point difference – which translates some 17 million votes – this undermines Prabowo and the opposition’s argument that the elections were rigged.”

More than 30,000 troops have been deployed across the capital amid reports of protests after the publication of the official election results.

Tensions have also increased since police said last week that they had arrested dozens of suspects linked to the Islamic State of Iraq and the Levant (ISIL or ISIS) who had planned to cause chaos by bombing post-election demonstrations. 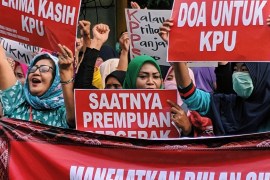 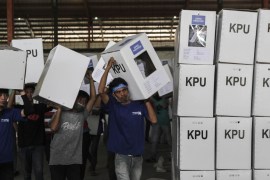 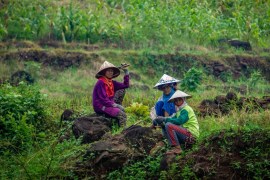