Iranian Foreign Minister Javad Zarif warned the United States is “playing a dangerous game” by boosting its military might in the Gulf as the fiery rhetoric between Washington and Tehran continues.

Zarif criticised the US move to deploy an aircraft carrier strike group and bomber task force earlier this month in response to an unspecified threat, cautioning that “having all these military assets in a small area is in of itself prone to accidents”.

“Extreme prudence is required and the United States is playing a very, very dangerous game,” he told CNN in an interview broadcast on Tuesday.

Friction between Tehran and Washington has steadily ratcheted up this month, a year after US President Donald Trump pulled out of a landmark 2015 nuclear accord brokered between the Islamic Republic and several other world powers. Under the deal, formally known as the Joint Comprehensive Plan of Action (JCPOA), Iran agreed to curb its nuclear programme in exchange for sanctions relief.

Since then, the Trump administration has pursued a “maximum pressure” campaign against Tehran, which it accuses of being a destabilising actor in the Middle East.

On Tuesday, Zarif said Tehran had “acted in good faith” over the JCPOA and accused the US of waging “economic warfare” on Iran by reimposing sanctions and moving to reduce Iranian oil exports to zero.

“Iran never negotiates with coercion. You cannot threaten any Iranian and expect them to engage. The way to do it is through respect, not through threats,” Zarif said, adding there would be “painful consequences” if current tensions escalate further.

Iranian President Hassan Rouhani said in a televised speech on Tuesday that whenever the US administration threatens Iran, international and domestic pressure means “they regret it in less than two hours”.

“All those with the responsibility of the world on their shoulders tell the White House that this was a very dangerous thing to say … [and] the Pentagon’s pressure makes the president apologise and say we don’t mean to wage war or attack,” he said.

Amid the sharp rhetoric, Iraqi Prime Minister Adel Abdul Mahdi announced on Tuesday that Baghdad will dispatch diplomatic delegations to Washington and Tehran in a bid to “halt tensions” as the ongoing war of words could erupt into a full-blown military conflict.

Abdul Mahdi also said there were no Iraqi groups that wanted to push towards a war, two days after a rocket landed close to the US embassy in the Iraqi capital, the latest in a series of regional attacks.

Last week, the US ordered the evacuation of nonessential diplomatic staff from Iraq amid unspecified threats from Iran and rising friction across the region.

The US has also blacklisted Iran’s Revolutionary Guard Corps, which has ties to a number of armed groups operating in Iraq, as a “terrorist group“. Iran has done the same to US forces operating in the Middle East.

On Tuesday, Patrick Shanahan, the acting US defence secretary, said while the threat posed by Iran in the region remained high, the potential for attacks on US nationals had been “put on hold”.

“I’d say we’re in a period where the threat remains high and our job is to make sure that there is no miscalculation by the Iranians,” he told reporters at the Pentagon.

Shanahan’s comments came after Trump on Sunday warned Iran to “never threaten the United States again”, adding: “If Iran wants to fight, that will be the official end of Iran.” He did not clarify what threats he meant.

Zarif dismissed the US leader’s comments as “genocidal taunts”. “Iranians have stood tall for millennia while aggressors all gone,” he wrote on Twitter.

Despite repeated threats of readiness to retaliate to any strike from the other, both sides have also repeatedly stated they do not want war.

Analysts, meanwhile, said there was unlikely to be a halt to the rhetoric or improvement in relations unless Trump changes tack and acts first in making a diplomatic overture to Iran.

“Iran wants to hear from the US president; they don’t want to hear the others because they know Bolton is pushing for confrontation or regime change,” said Mahjoob Zweiri, a director of the Gulf Studies Centre at Qatar University, referring to US National Security Adviser and renowned Iran critic John Bolton.

“Iran’s calculation is very clear. The maximum the president can stay is five years, so is it worth it to enter a confrontation with this president? Is it worth it to have a war that Iran will lose? The best solution is to find an exit strategy, either through a closed door or on camera negotiations,” Zweiri added.

“The Iranian side is looking to see if Trump can offer something, so they can start talking about next steps.”

Al Jazeera’s Zein Basravi, reporting from Tehran, said while many Iranians were worried about the threat of conflict with the US, for others the Islamic Republic’s economic woes were a more pressing issue.

“War is a concern and an existential threat, it remains a fear for many Iranians. But they say the more immediate problem they are facing is financial – their devolving currency and continued American sanctions that are eating away at Iran’s economy.” 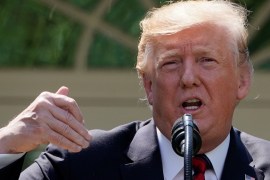 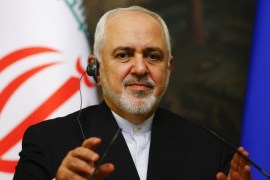 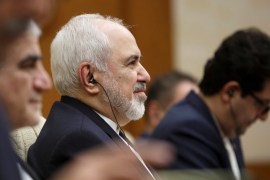 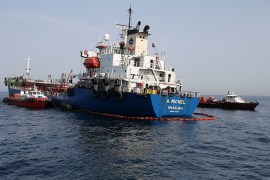