Rebels in northwestern Syria launched a counterattack on Tuesday against pro-government positions and fighting killed more than three dozen combatants from both sides, a war monitor said.

The fighting in the town of Kafr Nabuda, in the north of Hama province, killed 26 pro-government fighters as well as 18 rebels, the UK-based Syrian Observatory for Human Rights said. Syrian forces seized control of the town on May 8.

About 200,000 people caught in the crossfire in northwestern Syria have now fled intensified fighting between rebels and Syrian and Russian forces.

The territory is largely controlled by Hay’et Tahrir al-Sham (HTS), an armed group that formerly represented al-Qaeda’s Syrian wing. The Syrian government has vowed to remove HTS from the region.

Thousands of Syrians are on the move in search of safety, food and shelter, according to NGO Mercy Corps.

“People on the ground tell us that their first need is food, yet food prices have reportedly increased by up to 45 percent during the holy month of Ramadan in the worst-affected areas of northern Hama and southern Idlib,” said Made Ferguson, Mercy Corps’ deputy country director for Syria.

Marta Hurtado, spokeswoman for the UN High Commissioner for Human Rights, said fighting was continuing despite a 72-hour ceasefire, adding at least 200,000 people have now fled southern Idlib and northern Hama provinces since renewed fighting began at the end of last month.

“Air strikes and ground-based attacks continue to take place in various parts of Idlib and Hama governorates,” said Hurtado in a statement on Tuesday. “The situation remains volatile and the possibility of renewed clashes is high, worsening the prospects for some three million civilians caught in the crossfire.”

Hurtado said at least 105 civilians have been killed – including many women and children – since last month.

Syrian and Russian air raids have hit 18 health facilities and violence has destroyed at least 16 schools since last month, the United Nations says.

Some 70 aid groups called for an immediate end to the fighting in Idlib, saying conditions have reached a “crisis point”.

The groups said violence has forced at least 16 humanitarian organisations to suspend their operations in the region, adding staff were either displaced themselves or the facilities came under attack.

The fighting marks the biggest upsurge in violence since last summer between President Bashar al-Assad and his enemies in Idlib province and a belt of territory around it.

The battles have forced fleeing Syrians to live out in the open amid the exchanges of fire as they try to escape the region.

Ali al-Ahmed and his family fled on foot through the fields when the bombs began raining down on their house in northwestern Syria, escaping the major offensive by the Syrian army and its Russian allies.

“In the early hours of the morning, the artillery stopped. Then, the warplanes and helicopters came out,” said Ahmed, a 25-year-old farmer recalling his last hours in the village of Habeet, which he fled with his family of five dozen people.

Scattered during their frantic escape from the village, the family are now reunited in a makeshift shelter in an olive grove near the border with Turkey.

The night before Ali’s family left the village, they hid indoors or in basements. They feared to even to check around the village for other still living inhabitants.

Shelling hit his small truck, which they had planned to escape in. “The warplane was flying overhead,” he said. “So, we stood there watching the truck burn.”

Then, they set off through the fields: some of the relatives ran on foot. Others hopped into cars with their neighbours. A few stayed behind.

“For three days, we didn’t know anything about each other,” Ali said.

The family ended up in an olive grove in the border town of Atmeh two weeks ago. “Our entire lives today are under these two trees,” said Ali, who had already been uprooted twice before during the eight-year war. 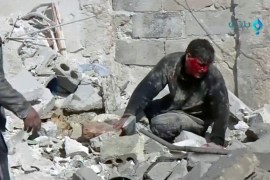 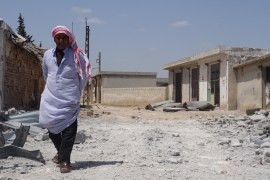 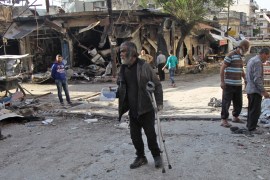