Washington, DC – A top US congressional Democrat on Thursday threatened to hold Attorney General William Barr in contempt if he fails to hand over a full, unredacted copy of Special Counsel Robert Mueller‘s Russia report.

The warning came as Barr failed to appear before the House Judiciary Committee, prompting Democrats to threaten enforcement proceedings to compel his appearance while Republicans angrily denounced the proceedings as partisan and unfair.

“We will have no choice but to move quickly to hold the attorney general in contempt if he stalls or fails to negotiate in good faith,” House Judiciary Chairman Jerrold Nadler said at the beginning of a brief meeting held in place of Barr’s testimony on Thursday.

Barr cancelled his scheduled Thursday appearance before the House panel over what the Justice Department described as “unnecessary” changes to the format of the hearing. The changes included an extra hour of proceedings to allow committee lawyers to question Barr – conditions Republicans said were unfairly designed to create the image of an impeachment proceeding against the president.

The redacted version of the special counsel’s report, released last month, said that Mueller’s probe did not establish the Trump campaign conspired with Russian operatives. The investigation did, however, examine “multiple acts” by President Donald Trump that “were capable of exerting undue influence over law enforcement investigations”.

Mueller did not conclude that Trump committed obstruction of justice, but did not exonerate him either. Barr and Deputy Attorney General Rod Rosenstein subsequently concluded that Trump, who has repeatedly called the Mueller probe a “witch-hunt”, did not break the law.

Barr’s Department of Justice failed to hand over the unredacted version of Mueller’s report on Wednesday, despite a subpoena deadline for the copy. The subpoena also sought underlying evidence from Mueller’s 22-month investigation.

Nadler and other Democrats said the committee would continue to seek Barr’s voluntary appearance and compliance with the subpoena for Mueller’s report over the next couple of days before taking steps to hold him in contempt.

“Here we stand today, with no other option but to hold the attorney general in contempt, which we hope that won’t happen,” said Democrat Sheila Jackson Lee. “We have not done that because we want to continue negotiations.”

This week’s developments come as a showdown between Democrats and the Trump administration continues to escalate. Multiple Trump administration officials have refused to appear for hearings or interviews and declined requests for documents on a sweeping set of demands from House committees seeking to investigate Trump’s finances and business deals. The president’s lawyers are suing to block House subpoenas for his bank and accounting records.

“If all we knew was the four corners of the Mueller report, it would be enough to question [President Donald] Trump’s fitness for office. The report is not where the story ends,” Nadler said on Thursday.

“In the days since the Department of Justice released the redacted version of the report, President Trump has told Congress that he plans to fight all of our subpoenas,” he added. “His promise to obstruct our work extends far beyond his contacts with the Russian government and allegations of obstruction of justice.”

She added, “As I watched Attorney General Barr’s performance yesterday in the Senate, there were so many questions that continue to arise about whether the attorney general is using his position to be a personal defence counsel for the president.”

On Wednesday, Barr defended his handling of the report in front of the Senate Judiciary Committee, where he was grilled by Democrats after it was revealed that Mueller had complained in writing on March 27, that Barr’s summary “did not fully capture the context, nature, and substance” of the special counsel’s investigation.

In the letter, Mueller also wrote, “There is now public confusion about critical aspects of the results of our investigation. This threatens to undermine a central purpose for which the Department appointed the Special Counsel: to assure full public confidence in the outcome of the investigations.”

Barr told senators on Wednesday that he had a 15-minute phone call with Mueller after receiving the letter. He said Mueller “was very clear with me that he was not suggesting that we had misrepresented his report”.

On Thursday, House Speaker Nancy Pelosi told reporters that “Barr lied to Congress”. She was apparently referring to Barr’s comments last month during a House Appropriations Committee hearing in which he said he was not aware if Mueller had concurred or disagreed with Barr’s summary of the investigation.

“If anybody else did that, it would be considered a crime,” Pelosi told reporters. “Nobody is above the law. Not the president of the United States, and not the attorney general.”

Senator Richard Blumenthal, a Democrat who had questioned Barr sharply on Wednesday, said Barr “is shattering the norms” of how grand jury investigations of presidents are handled.

Wednesday’s testimony was a “disaster for Barr’s place in history and his legacy”, Blumenthal told Al Jazeera.

“Lack of candor, misleading deceptive answers, mischaracterising the letter, saying Mueller was complaining about the press reporting of the summary when Mueller said in the letter it was Barr’s distorted version of it,” Blumenthal said.

Meanwhile, Senator Lindsey Graham, the Republican chairman of the Senate Judiciary Committee said he doesn’t blame Barr for not testifying in front of the House committee on Thursday.

“The Senate proved one thing yesterday. We can ask questions. Some good and some not, but he went through the democratic process,” Graham told reporters. 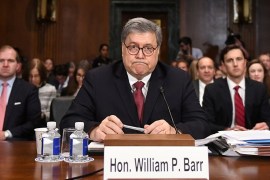 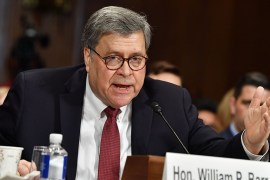 Senate Democrats grill Barr on his handling of Mueller report amid revelations that Mueller expressed frustration to AG. 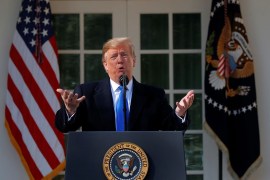