Hundreds of people have been protesting since Wednesday, erecting makeshift barricades of burning tyres and calling for President Patrice Talon to step down.

A video widely shared online appeared to show government forces firing guns and using water cannon. It was not immediately possible to verify the footage.

“The police and soldiers … they started firing, they chased people,” a resident told the AFP news agency. “We heard shots, lots of shots.”

A woman died on Thursday after being wounded the day before, medical sources told AFP.

The protests began hours after initial results on Wednesday showed a record low turnout in the election.

Supporters of former president Thomas Boni Yayi, who had led calls for a boycott of the ballot, took to the streets.

They erected makeshift barriers of burning tyres, and chanted slogans against President Talon.

Protesters have torched businesses, hurled stones, and smashed the windows of government buildings.

Police fired tear gas to break up crowds, and protesters tried to throw some canisters back.

“Talon … will not be able to kill our democracy,” one demonstrator said.

“Democracy is precious to us, the people of Benin,” said another. “That is why we have protested.

Violence was also reported in the town of Kandi, some 620 kilometres (385 miles) to the north.

One of the country’s largest cotton factories – a sector in which Talon made his fortune before entering politics – was set on fire.

“Protesters set the factory on fire in the evening,” said a firefighter. “Everything burned.”

The unrest followed the electoral commission’s decision to bar opposition parties from standing in the election because they were unable to meet strict criteria under a new election law to field candidates. Talon denied that was the intention of the law.

There was rioting in central Benin on Sunday, where opposition supporters burned houses, officials said.

Talon and Boni Yayi have a tense relationship. In 2012, Boni Yayi accused Talon, a cotton magnate, of trying to have him poisoned.

Talon defeated Boni Yayi’s preferred successor in a 2016 election when Boni Yayi was required by term limits to step down after 10 years in power.

In the run-up to the latest election, police dispersed a protest led by Boni Yayi with tear gas. The authorities also cut off the internet on the day of the vote.

Turnout had previously never dropped below 50 percent since the country’s transition to democracy in 1990.

Following the vote, Boni Yayi and Nicephore Soglo, president from 1991-1996, spoke out against the election.

“The people demand the return of democracy,” Boni Yayi told reporters on Monday, calling on people to resist the current president. “Talon will walk over our dead bodies.”

The situation has raised warnings from civil society and rights groups inside and outside Benin.

Amnesty International, speaking before voting, said that a “wave of arbitrary arrests of political activists and journalists, and the crackdown on peaceful protests” had reached an “alarming level”. 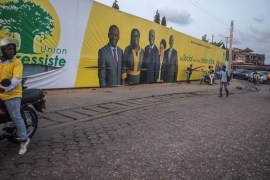 No opposition candidates as Benin votes in general election 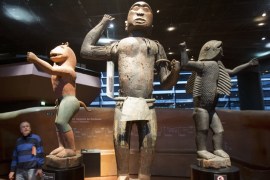 The decision follows a report which estimates that some 90 percent of African art is housed outside the continent. 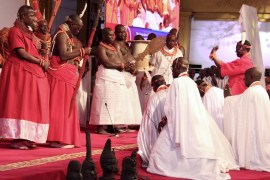 The Oba of Benin Kingdom: A history of the monarchy

Who is the Oba of Benin Kingdom in Nigeria and why is he so important to so many people? 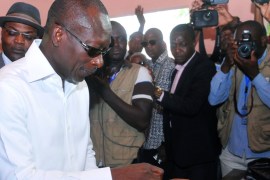 Rival Lionel Zinsou, the incumbent prime minister, concedes defeat to businessman after second round of voting.