Hundreds of thousands of protesters have joined a sit-in outside Sudan‘s defence ministry to press the ruling military council to hand over power to a civilian administration.

The huge crowd was answering a call by an alliance of activists and opposition groups to join a protest march through Khartoum on Thursday.

The Declaration of Freedom and Change Forces (DFCF) alliance said on Thursday it had submitted a draft constitutional document containing its vision for the transitional period to the Transitional Military Council (TMC).

Protesters and activists have been negotiating with the TMC to form a joint civilian-military body to oversee the period following the forced departure of long-time President Omar al-Bashir.

However, the parties are deadlocked over who would control the new council, and what the features of a transitional government would be.

Opposition groups say the ruling council must be civilian-led and have promised to maintain a sit-in outside the ministry until their demands are met, but the TMC has shown no sign of willingness to relinquish ultimate authority.

The proposed joint council would replace the existing 10-member TMC that took control after the military overthrew President al-Bashir three weeks ago.

But protest leaders from the DFCF alliance say the generals are not serious about handing power to civilians.

The army has been pushing for a council of seven military representatives and three civilians, while the alliance demands a council made up of eight civilians and seven generals.

The disagreement prompted the alliance to announce Thursday’s “million-strong march to assert our main demand, which is for civilian rule”.

People came from a number of different provinces to join the march, a witness told Reuters News Agency.

At a televised news conference on Thursday, a spokesman for the DFCF said it expected a response from the military to its constitutional draft within two or three days.

The military council has warned it will not allow “chaos” and urged protesters to dismantle makeshift barricades they have set up around the main protest hub outside army headquarters.

It also demanded demonstrators open roads and bridges blocked by protesters who have remained outside the headquarters despite al-Bashir’s departure.

Ahmed Adam, who teaches at the University of London, told Al Jazeera that people on the streets were waiting for the military council to fulfil its promise and hand over power to civilians.

“The fear is that the current situation might lead to a confrontation. Some regional powers are involved in the situation and they actually back the military council to stay in power. People on the ground want the opposite,” he said.

The protesters have won support from Western governments for their demands.

However, Gulf Arab states have provided the military council with a three-billion-dollar credit lifeline to support an “orderly” transition.

The African Union on Tuesday gave Sudan’s military rulers another 60 days to hand over power to a civilian authority or face suspension after an earlier deadline was missed. 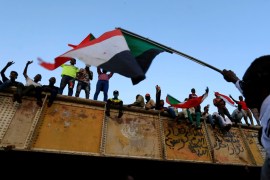 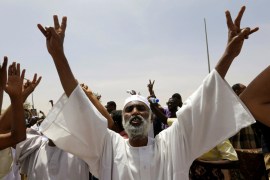 Tensions rise in Sudan amid disagreements between protesters and military rulers over makeup of transitional council.