In Abu Salim Detention Centre, in southern Tripoli in Libya, refugees and migrants say the price of food has more than doubled since clashes started on April 4.

Once a day, one group of friends prepares a small meal from a dwindling supply of flour, while worrying how long it can last. Others have nothing.

More than 400 people are trapped there, close to the front lines, as fighting rages around them. Among them are about 30 children, according to current and former detainees.

“We are hungry but at this time we don’t care about food, only how we can survive [with] our life,” an Eritrean teenager told Al Jazeera through WhatsApp messages sent from a hidden phone he will sell once the flour runs out.

They are among roughly 3,000 migrants and refugees currently held in detention centres run by the Libyan Department for Combatting Illegal Migration (DCIM), which is currently caught in the middle of clashes.

The fighting started when renegade military commander Khalifa Haftar ordered his Libyan National Army to advance on Tripoli on April 4. More than 370 people have been killed so far, according to the World Health Organisation.

Libyan authorities are in charge of providing food for detainees, but since last October refugees and migrants in Abu Salim detention centre have been buying their own.

They raise cash by going out of the centre to work, or use money sent by their families in Eritrea, Somalia, Sudan, and other countries – many of whom have entered into debt to support them.

“At this time, because of the war, the way of receiving money from family [is] completely closed. Also, there’s no transportation. Due to the war, it’s impossible to bring any food from outside,” said the teenager, whose name has been withheld for security reasons, like others interviewed for this story.

“We don’t have any food from any NGO. Like me, people don’t have money… It is very hard.”

Craig Kenzie, the project coordinator for Tripoli with Doctors Without Borders, known by its French initials MSF, said food has been a “chronic issue” in detention centres the aid agency works in, both before and since the conflict, which has led to “significant disruption” in food provisions.

“We reiterate the obligation that the [UN-backed Tripoli] government has in providing sufficient amounts of quantity and quality of food for people that they have chosen to arbitrarily detain in these detention centres.”

The United Nations refugee agency moved hundreds of refugees from Abu Salim Detention Centre earlier this month, but those left on the front lines are increasingly hopeless.

In other Tripoli detention centres, detainees using hidden phones told Al Jazeera they have gone for days without food and are drinking dirty water, causing some to get diarrhoea.

In Sabaa detention centre, where a recent MSF report found “alarming rates of acute malnutrition”, detainees said they eat once a day if they’re lucky.

“But at times there’s no food to take,” said a man there, through Facebook messages.

“Things have got worse. I am afraid of what can happen next. I feel more hungry than any day ever.”

Another detainee, who fled to Libya after his entire family was killed during the fighting, said drones have bombed areas close to the detention centre.

“The men’s hangar is infested with insects so we sleep under the trees. The food depot is empty, so you eat [only] if you have money.

A Sudanese detainee in a different Tripoli centre – who like others asked not to be named for fear of retaliation – said: “Every day is worse than before.”

Someone else with him added they get plain pasta once a day. “Every day they give us food just one time and not enough. Most people here are sick.”

In Abu Salim, the lack of food is particularly affecting those who were already weak, including at least 20 people with tuberculosis. Their biggest worry, though, is still the nearby fighting.

“We adapt to hunger, just we accept [it],” said the Eritrean teenager there.

“[We don’t care] about the scarcity of food, but we care about our life. How to leave the worst country of Libya to [a] safe place. Please, you do your best to evacuate us to a safe place.” 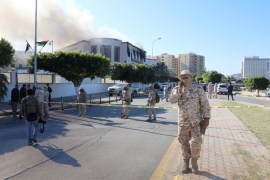 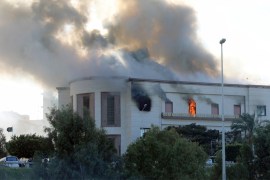 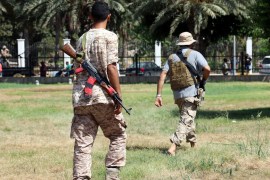