India has concluded its marathon seven-phase national elections, the country’s Election Commission has announced. The vote count is scheduled four days later on May 23.

The voting on Sunday wrapped up the six-week-long campaign in which Prime Minister Narendra Modi‘s Hindu nationalist Bharatiya Janata Party (BJP) is seeking a re-election for another five years.

Nearly 100 million people were eligible to vote on Sunday in 59 constituencies across seven states – including politically-critical Uttar Pradesh in the north and West Bengal in the east.

Up for grabs on Sunday were 13 seats in Punjab and an equal number in Uttar Pradesh, eight each in Bihar and Madhya Pradesh, nine in West Bengal, four in Himachal Pradesh and three in Jharkhand and Chandigarh.

Sunday’s voting also covered Modi’s constituency of Varanasi, a temple town where he was elected in 2014.

Pre-election poll surveys by the media indicate that no party is likely to win anything close to a majority in parliament, which has 543 seats up for grabs.

To stay in power, the BJP, which won a majority of 282 seats in 2014, may need to ally itself with some regional parties.

The general election is widely seen as a referendum on Modi’s five-year rule. He adopted a nationalist pitch in trying to win votes from the country’s Hindu majority by projecting a tough stance against Pakistan, India’s Muslim-majority neighbour and regional rival.

Modi played up the threat of Pakistan, especially after the suicide bombing of a paramilitary convoy on February 14 that killed 40 Indian soldiers.

Reporting from Varanasi, Al Jazeera’s Sohail Rahman said while the BJP positioned national security as its main poll agenda, the opposition attempted to corner Modi by focusing on issues of development.

“The discourse certainly changed after the Pulwama attacks and national security became the issue. However, people and experts that I talked to said actual issues haven’t come out, issues like health, education, sanitation and infrastructure, which the opposition used to target the government.”

“The incumbent BJP government has been very reluctant to talk about what they have achieved in the last five years,” he said.

The Indian National Congress and other opposition parties challenged Modi over a high unemployment rate of 6.1 percent and farmers’ distress aggravated by low crop prices.

Some of Modi’s boldest policy steps, such as the demonetisation of high-denomination currency notes to curb black-market money and bring a large number of people into the tax net, proved to be economically damaging.

A haphazard implementation of “one nation, one tax” – the Goods and Services Tax – also hit small and medium businesses.

The average voter turnout in the general elections was a record 67 percent, the Election Commission said.

The campaigning was marred by accusations and insults, as well as an unprecedented increase in the use of social media.

The Sunday voting was marred by sporadic incidents of violence in the eastern state of West Bengal, where crude bombs were hurled and rival parties claimed they were attacked and voters intimidated, news agency dpa citing Indian media reports said.

The BJP is trying to wrest seats in West Bengal from the Trinamool Congress (TMC), a powerful regional party that is currently governing the state

In a drastic and unprecedented action, the Election Commission cut campaigning off early in West Bengal on Thursday after days of clashes in the final stretch of the election. 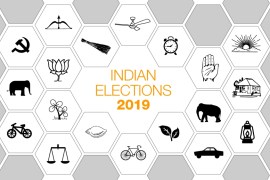 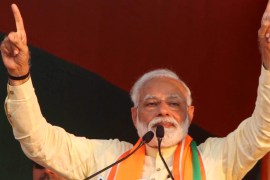 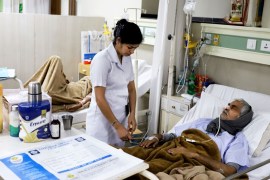 As India’s general election winds down, Al Jazeera reports on two most talked-about health initiatives in the country.