The United Nations has warned of a humanitarian crisis unfolding in Syria’s northwest province of Idlib, as Western powers challenged Syria and its ally Russia to provide assurances that attacks on hospitals and schools would stop.

Speaking at a UN Security Council meeting on Friday, UN humanitarian affairs coordinator Mark Lowcock said there had been concern about the escalating situation in Idlib for months.

“Last September, he (UN secretary-general) stressed that it was absolutely essential to avoid a full-scale battle in Idlib, and he warned that would unleash a humanitarian nightmare unlike any we have seen in Syria,” said Lowcock.

“When I briefed you here on September 18, I said a full-scale military onslaught could result in the worst humanitarian tragedy of the 21st century. Despite our warnings, our worst fears are now coming true.”

The UN warned that three million civilians are at risk as Syrian President Bashar al-Assad‘s forces – backed by Russians – have launched an offensive.

The council was meeting in an emergency session to discuss the surge of fighting in the Idlib region that has raised alarm of an imminent all-out assault which could lead to a humanitarian catastrophe.

The session in New York came as the White Helmets, a volunteer rescue group that operates in rebel-held parts of Syria, said at least six people were killed in 15 others wounded in air raids by pro-government forces in Idlib.

Four civilians lost their lives in Maarat al-Numan and two others in nearby Kafarruma, the group said.

Residents said loud blasts were heard across the capital, while state TV showed footage of the night sky with a point of light firing up into it and the sound of shooting. There was no immediate report of casualties or material damage, and no immediate comment from Israel.

The violence in Idlib has effectively shattered a ceasefire negotiated by Russia and Turkey, in place since September.

Russia has firmly backed Assad’s government in the eight-year war, while Turkey has supported rebel factions.

Meanwhile, at least 18 hospitals and clinics have been destroyed or damaged by air raids and shelling, several of which were on UN “no target” lists that detail exact locations of the health facilities to the warring sides, the UN aid chief told the council.

Lowcock said 49 health centres had partially or totally suspended activities, some for fear of being attacked, while 17 schools had been damaged or destroyed and many more closed.

Calling for an end to the attacks, Britain and the United States pressed Russia and Syria to provide assurances to the council that the situation would not continue.

“Russia and Syria are the only countries that fly planes in the area,” British Ambassador Karen Pierce told the council. “I think we need answers today.”

“If the answer is the Russian and Syrian air forces, I call on both ambassadors here today to give us the assurance that the attacks will stop.”

The acting US ambassador to the UN said Russia and Syria were responsible for attacks on health facilities and said it was “most alarming” that some were on the “no target” lists.

Speaking from UN headquarters in New York, Al Jazeera’s diplomatic editor James Bays said that members of the council felt the need to address the issue of Idlib in an open meeting after attempts to address it behind closed doors seemed to fail.

“Some members of council hoped that by raising this (the situation in Idlib) in a closed meeting a week ago, that perhaps Russia would not like the pressure on them and that they might back down.

But Russia said that hospitals and other civilian infrastructure were not being targeted and stressed that military operations were aimed at wiping out “terrorists”.

“Not the Syrian army, or the Syrian air force, or Russia are conducting hostilities against civilians or civilian infrastructure.”

“Our goal is the terrorists,” he said.

Hay’et Tahrir al-Sham (HTS), Syria’s former al-Qaeda affiliate which is on the UN “terror” list, controls most of Idlib province as well as parts of neighbouring Aleppo, Hama and Latakia provinces.

‘Deliberate’ targeting of schools and hospitals

Meanwhile, some 70 aid groups called for an immediate end to the fighting in Idlib, saying conditions have reached a “crisis point”.

The groups said violence has forced at least 16 humanitarian organisations to suspend their operations in the region, adding that staff were either displaced themselves or the facilities came under attack.

In a statement to the council meeting, Amnesty International called on members states to pressure Russia over the “deliberate” targeting of health and education facilities and ending the “onslaught” against civilians.

“Bombing hospitals carrying out their medical functions is a war crime,” said Lynn Maalouf, Amnesty International’s director of research for the Middle East.

“The international community has so far utterly failed to protect civilians in Syria from the horrors of this conflict,” she said.

Staff from four hospitals in Idlib and Hama told Amnesty that they had been targeted despite sharing their coordinates with the Syrian and Russian governments.

Corroborating UN statements, Physicians for Human Rights said it had verified that over the past four weeks Syrian government forces and their Russian allies have carried out nine attacks on hospitals and medical facilities.

The aid groups said that at least 15 health facilities and 16 schools were reported to have been significantly damaged or destroyed. At least two health workers were killed. 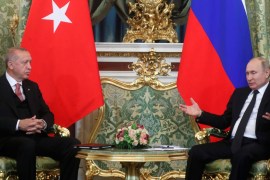 Are Russia and Turkey making deals or parting ways in Syria?

The recent escalation in Idlib demonstrates that Russia and Turkey are increasingly unable to agree on Syria. 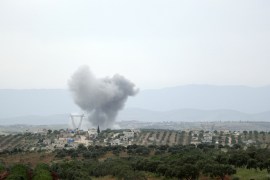 Daraya: A Library Under Bombs in Syria

A group of young men decide to build a secret library collecting books from their war-torn neighbourhood in Syria.