Morrison, who had campaigned on providing tax cuts and the strength of Australia‘s economy, claimed the win shortly after Labor leader Bill Shorten conceded defeat on Saturday.

“I have always believed in miracles … and tonight we’ve been delivered another one,” Morrison told a jubilant crowd of supporters in Sydney.

“Tonight is not about me or it’s not about even the Liberal party. Tonight is about every single Australian who depends on their government to put them first.”

While the Liberal-led conservative coalition scored more seats in the 151-member House of Representatives than Labor did, it was unclear whether they will win an outright majority of 76 seats or if they will need to negotiate with independents to form a minority government.

Projections by the Australian Electoral Commission late on Saturday showed the ruling coalition winning 67 seats to Labor’s 55. The final result will be announced in the coming days.

In his concession speech, Shorten told distraught supporters it was “obvious that Labor will not be able to form the next government”.

Speaking in Melbourne, the opposition leader said he had called Morrison to offer congratulations.

He added that he would not contest Labor’s next vote for party leader, and urged supporters to “carry on the fight”.

Australia has had six changes of prime minister over the past 12 years – mostly the result of internal party fights. Shorten had sold his party as a chance to escape the “chaos” of the ruling coalition and to create a fairer Australia.

Josh Frydenberg, treasurer and Morrison’s second-in-command, said: “The economic choice at this election was at the heart of the minds of Australian voters.” Australia’s economy has grown consecutively for 28 years.

While the election was always expected to be close, the results were markedly different from what virtually all opinion and exit polls had predicted.

A Nine-Galaxy poll on Saturday showed Labor winning as many as 82 seats in the 151-member House of Representatives.

Newspoll, a poll conducted by The Australian newspaper, showed the coalition trailing Labor for the 50th consecutive time in March.

A final Newspoll released on Friday showed the lowest primary vote intention for the coalition recorded on the eve of an election since Newspoll records began in 1987.

Jayani Nadarajalingam, a lecturer in Australian politics at the University of Melbourne, said Saturday’s results suggested “an endorsement or unwillingness to get rid of the status quo”.

Nationally, the largest swing against Labor came from Australians aged over 65. In addition to raising taxes for high-income earners, Shorten had pledged to remove tax breaks for income made on shares owned by retired Australians – a policy idea branded by the coalition as a “retiree tax”.

Queensland, typically Australia’s most conservative state, saw a large swing away from Labor including around the state capital of Brisbane. Penny Wong, a Labor Senator, told local television she “would have preferred a better result out of Queensland”.

“We always knew Queensland was somewhere to watch, but to the extent that it supported the coalition I think surprised many,” said Nadarajalingam.

Several seats in Australia’s largest city Sydney, however, saw a significant swing against the coalition.

Former Liberal prime minister, Tony Abbott, who had held his seat of Warringah in Sydney’s affluent Northern Beaches since 1994, lost to his opponent Zali Steggal, a lawyer and former Olympian.

Abbott, who has been seen as a destructive force within the coalition since he was dumped as party leader in September 2015, was targeted during the campaign by the progressive lobby group, GetUp.

“Of course, it’s disappointing for us here in Warringah. But what matters is what’s best for the country … who forms a government in Canberra,” said Abbott in his concession speech.

“This is a stupendous result for Scott Morrison and the rest of the wider Liberal team.”

Julie Bishop, a former foreign minister, said on television that Abbott’s loss was punishment for being a “climate change denier”.

Steggal is an independent who positioned herself as an economic conservative, but who would take more progressive positions on climate and social policy. She had nevertheless said she would back the coalition to form a government.

Minister for Home Affairs Peter Dutton, another right-wing Liberal who had also been targeted by GetUp, retained his seat.

“GetUp and the Labor Party and the Greens have run the dirtiest campaign in history,” he told an event in his suburban Brisbane electorate.

The Greens’ Adam Bandt, member for Melbourne and the party’s only parliamentarian in the House of Representatives, retained his seat. 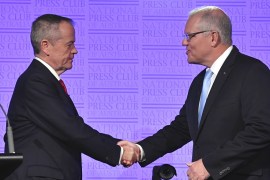 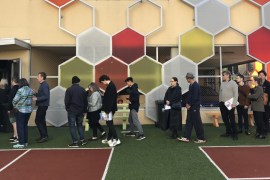 Ruling Liberal-National coalition and Labor Party are neck-and-neck, according to the Electoral Commission projections. 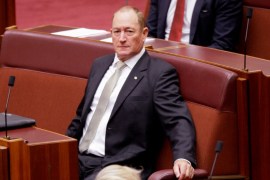