Palestinian Foreign Minister Riyad al-Maliki has described the anticipated US Israel-Palestine peace plan as a “consecration” of Palestinian suffering.

“The US ‘deal of the century’ is the consecration of our century-old ordeal: no independence, no sovereignty, no freedom, no justice,” al-Maliki said on Friday at the London-based Chatham House think-tank.

“And if they do not think that this situation will have an impact on the future of Israel and the region, one way or the other, they are the ones that are delusional, not us.”

The foreign minister’s speech comes amid diplomatic efforts by the Palestinian administration to garner foreign support as the US prepares to release its peace plan, devised by Jared Kushner, US President Donald Trump‘s son-in-law and senior adviser.

The US has not confirmed details of the plan, which it says could be presented next month.

Previous US attempts to revive the peace process between Israel and Palestinian leaders have failed to reach a final agreement, with the status of Jerusalem and the ongoing expansion of the Israeli settlements in the occupied Palestinian territories key obstacles.

In early May Kushner suggested the plan could pull back from long-standing mentions of a two-state solution and accept Jerusalem as Israel’s capital.

The plan has been described by Palestinians such as Riyad Mansour, the Palestinian ambassador to the UN, as being “dead on arrival”.

Israel has not adopted an official position on the plan.

Palestinian leaders have refused to participate in the US-led effort since December 2017, when the Trump administration turned its back on decades of US policy by recognising Jerusalem as Israel’s capital and moving the US embassy from Tel Aviv.

Al-Maliki also criticised the US administration for preparing to give “its stamp of approval to Israel’s colonial policies”.

He expressed appreciation to the international community for standing up against the embassy move and against cuts to UNRWA, the UN agency for Palestinian refugees, but urged the world to take a more proactive stance in leading the peace process, saying that “the world left the steering wheel in the hands of a reckless driver”.

“We disagree with the view that we should wait till he goes over a cliff or runs over the Palestinian people to do something about it,” al-Maliki said.

The foreign minister said there were two options to end the conflict – a peace accord or capitulation.

Al-Maliki said Palestinians are ready to negotiate a peace accord based on the internationally recognised pre-1967 borders under international monitoring holding parties to account, but that they will “never be ready to sign a surrender act”.

“If people struggling against oppression across history surrendered to the odds, they will all be in chains today. We have defied the odds many times before and we will again,” al-Maliki said.

He added that the two-state solution should be examined and that the international community should ensure that the cost of having ties with the settlements and “their associated regime” far outweighs the benefits, for both officials, entities, companies and governments.

“The freedom of the Palestinian people and peace for all the peoples of the region is a worthy objective that deserves much more from everyone.”

Last week al-Maliki expressed alarm at a United Nations meeting, saying that the US was not crafting a peace plan, but rather “conditions for surrender“.

Kushner has said the peace plan will be released sometime in June after the conclusion of the Muslim holy month of Ramadan. 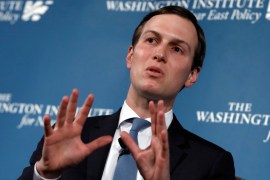 Jared Kushner on ‘two-state’ solution: ‘Let’s just not say it’

President Trump’s son-in-law is to reveal long-awaited plan next month despite rejection from Palestinian leadership. 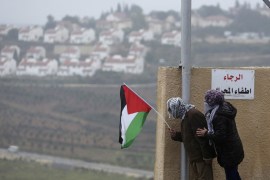 The two-state solution is still the only game in town

Even after Donald Trump’s Jerusalem decision, there is no feasible alternative to the two-state solution in Palestine.