Summer may be around the corner but the Mediterranean island of Corsica is firmly gripped by winter.

Cold weather and heavy snow blanketed the island on Wednesday, taking many locals by surprise.

“It’s very rare and very remarkable to have snow in Corsica in May, but we need a little more hindsight to decide just how exceptional this is,” Patrick Rebillout, head of Meteo Meteorological Center of Meteofrance in Ajaccio, told AFP news agency.

“In May, the weather is usually nice, but there can still be big cold descents,” he added.

As much as 30cm of snow was reported at some of the mountain stations. Even away from the peaks, the snow proved heavy.

Up to 25cm of snow was reported along the Vizzavona pass which connects Ajaccio to Bastia. This important junction which links Corsica-South to Upper Corsica was closed to all vehicles in the early morning, reopening shortly before 10:30am.

As the snow fell, a number of temperature records also tumbled. Pietralba, which is 510 metres above sea level, reported a temperature of just 0.9C, beating the previous record of 2.9C.

The previous record for all three of these locations was set just a week earlier when another cold blast engulfed the island. The two intrusions of cold air have made the weather this month particularly unusual.

The cold weather is part of the same weather system which has also brought damaging winds and flooding to parts of southeast Europe over the last few days.

The worst of the conditions have already cleared away from Corsica and temperatures are quickly recovering. However, more rain is expected on Friday and things are going to stay rather unsettled over the next few days. 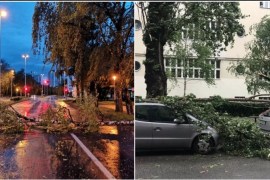 Heavy rain, power outages and flooding are being reported with more on the way. 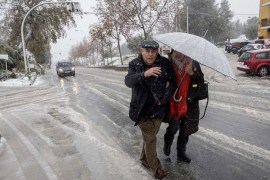 First snow in more than a century in Torrevieja, Spain

The Spanish Costa Blanca is white with snow in a rare weather event in the Mediterranean.