The  United States military is investigating the alleged sabotage attacks on four oil tankers off the coast of the United Arab Emirates (UAE).

Al Jazeera’s Rosiland Jordan, reporting from Washington, said the US military was asked to get involved in the probe.

“A CENTCOM [US Central Command] official is confirming to Al Jazeera that, at the request of the United Arab Emirates, the US military is helping with their investigation.”

The incident on Sunday comes amid growing tensions in the Gulf and a war of words between the US and Iran.

Iran’s foreign ministry called the incidents “worrisome and dreadful” and also asked for an investigation.

The four ships – two Saudi, one Norwegian and one Emirati – were allegedly damaged in what Emirati officials described as acts of sabotage near the port of Fujairah.

The incident happened 140km south of the Strait of Hormuz, where about one third of all oil traded by sea passes through.

Details of the alleged sabotage remained unclear, and UAE officials have declined to say who they suspected was responsible.

US President Donald Trump has warned Iran if it does “anything” in the form of an attack it will “suffer greatly”.

On Monday, the New York Times reported the top US defence official has presented an updated military plan to Trump’s administration that envisions sending up to 120,000 troops to the Middle East should Iran attack US forces or accelerate work on nuclear weapons.

Trump denied the report on Tuesday, calling it “fake news”.

Tensions between Iran and the US have intensified since Trump pulled out of a 2015 international deal to curb Iran’s nuclear activities and imposed increasingly strict sanctions on Tehran.

Trump wants to force Tehran to agree to a broader arms control accord and has sent an aircraft carrier and B-52 bombers to the Gulf in a show of force against what US officials have said are threats to US troops in the region.

Iran has said the US is engaging in “psychological warfare”, and called the US military presence “a target” rather than a threat and said it will not allow its oil exports to be halted. 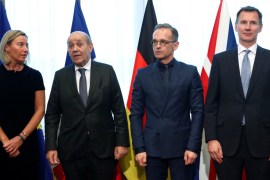 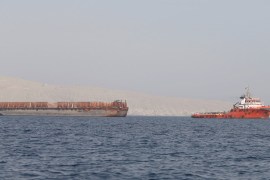 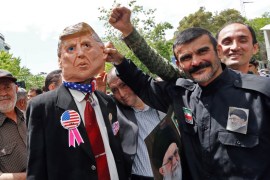 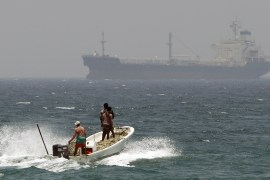