At the brief and sombre hearing in Christchurch on Friday, Justice Cameron Mander ordered Brenton Tarrant, the suspected gunman, to undergo a psychiatric assessment to determine his fitness to stand trial as he appeared by video link from a prison in Auckland.

The 28-year-old, a self-confessed white supremacist, sat still with an impassive face during the preliminary hearing, in contrast to his first court appearance when he smirked at the media and appeared to flash a white nationalist hand signal.

New Zealand police on Thursday filed 49 counts of murder against Tarrant, bringing the total number of murder charges to 50. He was also charged with 39 counts of attempted murder.

Mander suppressed the names of the 39 survivors, citing concern for their welfare.

The gallery was packed with survivors, two of them in wheelchairs, as well as relatives of victims.

For many, it was their first glimpse of the man accused over the March 15 gun massacre which targetted two mosques in Christchurch as people gathered for Friday prayers.

Tarrant did not enter a plea and was remanded in custody until his next court appearance on June 14. The judge did not set a trial date.

Dressed in a grey prison sweatshirt and hands cuffed together in front of him, Tarrant occasionally tilted his head to one side as he listened to the judge speak.

Tarrant had sacked his court-appointed lawyer last month, saying he would represent himself. But at Friday’s court hearing he was represented by two lawyers.

Shane Tait, a member of Tarrant’s legal team, said he was concerned the publication of the news that Tarrant’s mental health was being assessed could prejudice the trial.

But Mander said the mental assessment was “an entirely normal, regular step to be taken at this stage of the process”.

If found guilty, Tarrant faces life in prison without parole, something that has never happened in New Zealand before.

The Pacific island nation does not have the death penalty and the longest previous sentence of prison time without parole was 30 years.

After the hearing, victims and their families received a private debriefing session in the courtroom. Some were emotional as they left the building.

Yama Nabi, whose father Haji Daoud Nabi was among those killed at the Noor Mosque, said it was important for him to be at the court.

Describing the killer as a “coward”, Yama said he wanted justice.

Tarrant’s second court appearance comes three weeks after the attack, as the New Zealand government rushed to make changes to gun laws and investigate how he was able to carry out the attacks.

On Thursday, the government held a single day of public hearings as it rushed to implement new gun-control laws, due to be passed on April 11.

The law change – which enjoys broad support in parliament – would ban most types of semi-automatic weapons, including those used in the March attacks. 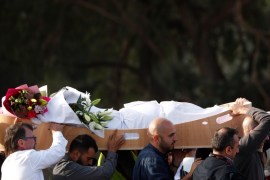 The 28-year-old to make second appearance in court on Friday, three weeks after the attack where 50 people were killed. 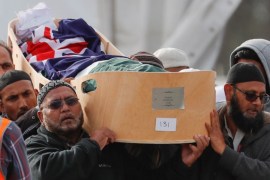